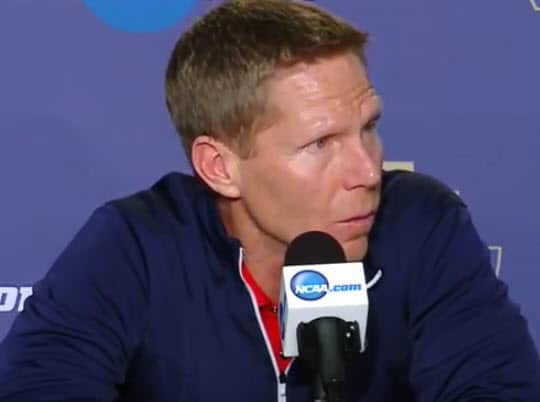 Here is the Mark Few Gonzaga Basketball Offense. Take a look at them.

Here is how Coach Few and the Gonzaga Basketball Program are doing right now:

Coach Few is up for the Coach of the Year, and some ESPN talking heads viewed Josh Pastner as the guy to get that away. Coach Josh Pastner has taken Georgia Tech from dead last in the ACC in the middle of the pack in the conference. Scott Drew has Baylor going for a number one seed in the NCAA Tournament right now. Sean Miller has the Arizona Wildcats at the top of the Pac-12.

I think that Mark Few is going to win Coach of the Year. Gonzaga has an undefeated record right now. They beat the Arizona Wildcats and have wins over Florida and Iowa State. It’s hard to go undefeated in any month and tougher in February.

They have won every step, and I fully expect them to win the WCC Conference Tournament. They might not have the best competition in the WCC, but they have finished off all their competition that they have played.

Gonzaga has risen to the very top of the rankings and will have a number one seed in the NCAA Tournament. They are one of the best offensive and defensive teams in the country plus the fact that they are as deep as anyone in the nation. Put Coach Few at the helm of that ship, and they have their best chance to win a NCAA Championship this year.

The Gonzaga Bulldogs are becoming one of the blue blood of college basketball. Coach Few will win that Coach of the Year award and then have a great chance at a championship too.