What is wrong with the Golden State Warriors Record 2017? by Chris Filios 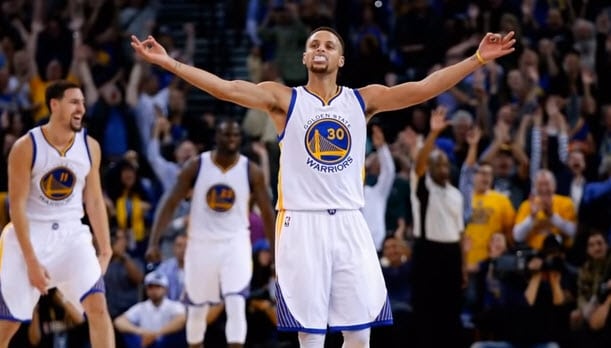 So who had the Golden State Warriors Record 2017 at 4-3 after their first seven games? No one did. The majority of the experts already had the defending champions taking home the trophy again without even playing a game. The question that was being asked was: is there anyone that can challenge the Warriors? Most said no. It was just a matter who was going to take second. Now a couple of weeks into the season, the Warriors are 4-3, including two losses at home where they have been dominant, and they certainly don’t look like the best the team in the NBA. They are now in the 6th place in the Western Conference and 2nd in the Pacific division.

There is no doubt that the Golden State Warriors are still an offensive juggernaut. They still lead the NBA in scoring and most efficiency stats. However, there are a couple of areas that they have remarkably regressed since last year (highlighted above).

First, they are turning the ball over at an extremely high rate- second worst in the NBA in fact. They are turning it over on 16.5% of their possessions. Due to their high pace and free-flowing styling play, they have never been extremely secure with the ball, but this year they are averaging 18.4 TO’s game, which is a 24.8% increase over last year (ranked 22nd in TOV%). Here are their TO numbers this year in losses:

This casualness with the basketball is pretty disturbing considering the clip they score the ball.

However, ball security is not the Warriors. Over the past several years, the real backbone of the Warriors hasn’t been their offense, but their championship level defense. This is where the most significant regression from last year has occurred. The past three years, the Warriors have ranked:

The Warriors opponents are shooting it better (up 1.8%), turning it over less (4.2% less), rebounding it at a higher clip (up 11.9%), and thus, scoring more points (up 9.6% and about ten more points per game). They rank towards the bottom of the NBA in many of the key defensive categories.

It is somewhat baffling as to their struggles considering there hasn’t been much of a change in personnel (most of the Warriors core is back from last year) and their defensive scheme has remained pretty much the same. Looking at the surface, it just seems that there has been a lack of effort- physical and mental, poor communication, and giving up more easy baskets due to their carelessness with the basketball.

So is it time to panic? No. Should be there some concern on the Golden State Warriors Record 2017? Probably. While it is difficult to maintain the championship level way of doing things they have done, there should be this type of regression.

← Prev: The BLOB everyone runs, yet still can’t defend! Next: Four NBA Coaches on the Hot Seat! 2011 NBA Coaches Clinic Notes inside! →