– The defense begins when the offense makes an attack dribble.  Vance Walberg wants the handler to have to dribble hard, rather than take one dribble and pass.
– Each player in the press has a name and role: controller, gapper, taker, reader, teaser

– Controller Responsibilities:
o The controller is the player guarding the ball. He is the only defender who only guards one player.
o Primary responsibility is not letting the ball handler see the floor. This avoids straight line passes.
o The controller’s next job is making the ball handler dribble.  Vance Walberg is not as concerned which direction the ball is dribbled.
o Controller wants to force the handler to turn at least once in the back court. Two turns is a great job.

– In the above diagram, X1 is the controller and X2 is the gapper. On the middle drive, the gapper sprints to trap the ball. On a pass to 2, X1 would jump switch to the ball.

– Sideline Dribble:
– In the above diagram, 1 dribbles up the sideline. X1 wants to make him turn, and X2 sprints behind to trap.

– Taker Responsibilities:
o The taker is the defender in the middle who is on the same side as the controller.
o His primary job is to take the sideline pass away. Play on the high side of the receiver.
o Don’t come up to trap. The taker coming to trap with the controller and the gapper creates a “Terrible 3” situation. Vance Walberg never wants three on the ball.

– Reader Responsibilities:
o The reader is the middle defender on the opposite side of the ball.
o He “reads” the floor and should be active looking for steals/deflections.
o The reader must understand when he cannot rotate to get a pass.
o If the reader sees that the controller gets beaten badly, he can come up to stop the ball and the gapper sprints back.

– In the above diagram, X4 is the reader. He realizes that X1 has been beaten badly, so he stops the ball. The gapper (X2) must sprint back.

– Teaser Responsibilities:
o The teaser is the deep player in the 2-2-1. This is usually your post player.
o His main job is to tease the inbounder into throwing a full court pass. Vance Walberg wants him to cheat up. An athletic player can cheat nearly to half court.
o The teaser should not have his shoulders square to the ball. He must see the deepest offensive player and be ready to sprint.
o The teaser always takes the long opposite pass.

– Vertical traps:
o If the ball is caught in the Cushion Zone, the on-ball defender plays the “cat and mouse game.” The trailing defender on the same side sets a vertical trap.

– “Phasing”:
o When your man cuts out of your area, don’t go with him. This would create a gap.

– Vs. 1-Guard Front:
o If offense tries to break press with one guard, deny his catch.

– Vs. 2-Guard Front:
o The goal vs. a 2-guard front is to force a corner catch. The weak side defender will take the in bounder on a pass to the strong side corner.

– Vs. 3-Guard Front:
o The goal vs. a 3-guard front is to keep the ball out of the middle.
o Allow the pass furthest away from the in bounder.

– On dead ball situations, they will match the offensive set man-to-man.
– Read the inbounder’s eyes.
– “If you can get to your quarters, you solve 99% of your problems.”
– “Find a way to win when you don’t shoot well.”

Coach Aaron Blatch is entering his 9th season as assistant coach at his alma mater, Southern Local High School in Salineville, OH. Coach Blatch has coached junior high and junior varsity teams, and runs the school’s K-6 program. During his tenure, the Indians have achieved the three best seasons in school history, and his youth program has allowed players to develop their skills throughout the year beginning in kindergarten. 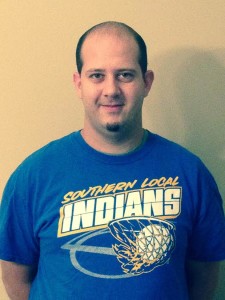