Here are three set plays from Utah Jazz Head Coach Quin Snyder. Each play was designed to get Gordon Hayward the ball in a scoring situation. Hayward, who was a standout college player for Brad Stevens at Bulter, has proven himself an NBA star as well. Last season, he averaged 19.7 points per game and 5 rebounds. His average points per game has increased every season since he has been in the league. Snyder has been the head coach in Salt Lake City for two seasons now, both seasons finishing 3rd in the Northwest Division. Snyder has spent many years at various levels including college, NBA, NBA D-League, and international. He started his coaching as an assistant for the Los Angeles Clippers in 1992. He was then an assistant at Duke, then took over as Missouri Head Coach in 1999. In 2007, he was named the Head Coach of the Austin Toros in the D-League and won NBA D-League Coach of the Year in 2009. He was then an assistant with the 76ers, Lakers, CSKA Moscow, and the Hawks before becoming the Head Coach of the Jazz in 2014.

Hayward brings the ball up and pushes 2 to the opposite corner. Once the side has cleared, 5 sets a step up ball screen for Hayward on the right wing.

In this play, Hayward uses a horns ball screen from 5 then another one from 4 looping around to the right elbow. 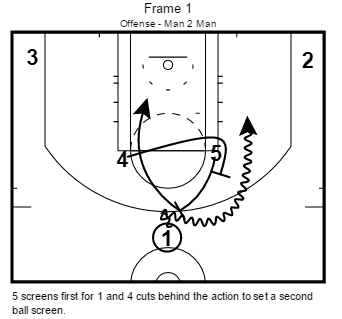 1 dribbles down to give Hayward the ball with a dribble handoff. Hayward uses the handoff and comes off of a ball screen from 5 following the action. 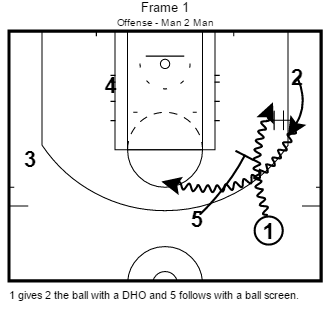