There are many teams capable of upsets this year in the NCAA Tournament, but will there be a VCU, Wichita State, Georgia State, Northern Iowa, or Florida Gulf Coast run like we’ve seen in the past? There are better teams this season at the #11 seeds and up than I can remember in recent history, but upsets depend on the correct match-up. Georgia State was able to beat Baylor in the tournament last season because of the Panthers’ ability to shoot against zones. Northern Iowa beat Kansas because Ali Farokmanesh played out of his mind (and Coach Jacobson is an expert with X’s & O’s). Florida Gulf Coast won over Georgetown because they could match-up athletically (more on these guys in just a little bit). Of course, the upsets will come from somebody we don’t expect this season. The question is, who will it be? This article will dive into the #11 through #16 seeds that have a shot at creating this year’s madness. 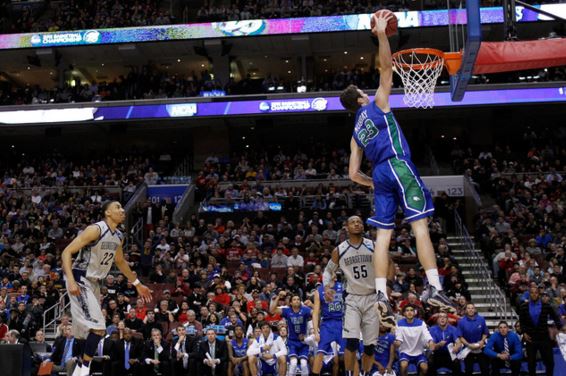 It’s not even fair how good these #11’s are this year. I’m sure many people struggled with whether or not to send all 4 into the second round.

Of course this team is dangerous. They showed how good they were in the First Four matchup against Vanderbilt, and they have the right equation: Good Coach + Experienced Players + A Great Point Guard = SUCCESS IN MARCH. Here are a couple of plays used by Gregg Marshall in the win over Vandy.

The Texas match-up could be tough, but it will come down to how much offense the Panthers get to run. Coach Shaka Smart should try to pressure UNI as much as possible and prevent them from playing in the half court. The more Coach Jacobson gets to call plays, the better chance they have of winning the game.

The Wolverines barely got past Tulsa last night, but with the guard talent and the play calling of Coach Beilein they will have a good shot at beating Notre Dame. Here are several plays used by Michigan last night.

Gonzaga has been on both ends, as a favorite and as an underdog. They are well equipped to make a run in the Midwest Region, and they matchups are in their favor. They have big guys that can play, and will use them to try to beat Seton Hall.

Yale will have to shoot lights out to beat Baylor, but they’ve got the guys to do it.

The Mocs have a new head coach with Will Wade leaving for VCU, but McCall has Chattanooga playing well and confident.

Little Rock may have the biggest upset potential. They had a great season, and won their conference tournament easily. They have a former D2 Head Coach leading the way now, and his experience in the D2 National Tournament is going to help. South Dakota State has big, long guys and a really good post player. I added SFA here because they are the only #14 seed that I see having a shot.

Hawaii may have a good shot, but I think the real upset chance here is with Iona. AJ English is a stud, and the Gaels like to score a lot. This can go well against Iowa State (as long as they can keep up with the scoring from the Cylcones).

Watch out for Weber State. They had a fantastic season and have a GREAT post player in Joel Bolomboy (will probably go in the first round of the draft). Here are some plays used late in the game against Eastern Washington in the Big Sky Conference.

We saw some impressive play from Holy Cross last night, but can the Princeton offense and zone defense work against Oregon?

Dunk city is gone, Coach Enfield is gone, but the FGCU Eagles are back in the tournament and looking to upset a powerhouse team. The Eagles are now led by former Kansas assistant coach Coach Joe Dooley. Dooley has FGCU playing less like Dunk City, and more like….Kansas. They play through the post, they guard on the perimeter, and they rebound. Coach Dooley seems to have the right system in place. The question is, does it really matter against UNC? North Carolina will have to shoot poorly for FGCU to have a chance, but we have seen that from North Carolina at times this season. Here are zone sets that FGCU used in the First Four matchup.

Of course, it’s unpredictable, and there will be upsets that are not detailed here. I suppose that’s why you play the game! Nevertheless, it will be a fun tournament as always. Not noted here, but important to note is that a lot of upsets may come from the #4 through #10 seeds (as we go into later rounds). Just a few of the teams in this range are: California, Arizona, Iowa, Temple, Texas, VCU, Notre Dame, Butler, and Syracuse.