Rory Hamilton has 17 years of basketball coaching experience at the collegiate and high school level. Coach Hamilton just finished up his first season at Norman North High School where the Timberwolves posted a 17-9 record. Season highlights included a tournament championship at the Altus Bulldog Invitational, runner up at the Sapulpa Chieftain Holiday Classic, and losing in the 6A area playoffs. Prior to Norman North, he served as the head girls coach at Mount St. Mary Catholic High School in Oklahoma City, OK. In seven years at MSM, he posted a 108-75 record and is the winningest girls coach in school history. Coach Hamilton led the Rockets to three consecutive 4A state tournament appearances. In 2011-2012, the Rockets had a 20-7 record and made it to the state tournament for the first time in school history. The next year in 2012-2013, the Rockets posted a 25-6 record and earned the silver ball, losing in the 4A state championship game to Fort Gibson. Last season in 2013-2014, the Rockets posted a 23-7 record and lost to Anadarko in the 4A state tournament semifinals. Coach Hamilton was named Central Oklahoma Conference coach of the year three times and was selected to coach the Little All-City all-star game three consecutive years from 2012-2014. Prior to MSM, coach Hamilton had assistant coaching jobs at Cache High School, Maize High School in Wichita, KS and Newman University. Coach Hamilton is married to the former Allison Barse of Norman, Oklahoma. They have two children, Maddox (10) and Avery (6). He played collegiate basketball for one year at Butler County Community College and then transferred to play baseball at Newman University and graduated with a B.S. in secondary education and a B.A. in mathematics. Coach Hamilton received his M.Ed. in curriculum and instruction from Wichita State University. Coach Hamilton’s interests include Wichita State Shocker basketball and spending time in Norman with his family and friends.


(This is part 4 of a 4 part series on how to attack “junk defense.” Find Part 1 here: 4 Reasons Why You Will See Junk Defense, Part 2 here: Developing Your Offensive Philosophy vs Junk Defense, and Part 3 here: Simple Sets & Concepts for Attacking Box/Diamond &1)

Part 4 of my series on attacking junk defenses looks at simple sets and concepts that can be used effectively versus a Triangle-and-Two Defense. The Triangle-and-Two Defense is much more unorthodox to play against than a box and 1 and it has been used effectively over the years by the likes of Rick Majerus and Tim Floyd. The Triangle & 2 Defense looks to play two defenders man to man, while using the other three players in either a triangle or inverted triangle. More times than not, the players being guarded man to man are perimeter players. One important question to reflect upon is whether your junk attack will try to free up the two defended players, or will you run offense and or sets to put other players into a position to score. Again, I think balance is important so being diverse in your attacks may be more beneficial long-term for you and your program.

The first offensive set called “elbow” looks to attack a traditional Triangle-and-Two Defense by putting the two guarded players in the corners and playing 3 vs. 3 with the other players. The beauty of this set is its simplicity and freedom. The point guard looks to attack the top defender and drag off the point while the weak side post player flashes hard to the elbow for a potential shot. After the pass, the point guard cuts hard to hoop and then opposite block looking for a quick give and go. The weak side post player waits for point guard to clear and then flashes to elbow and the continuity continues. Another nice option off of “elbow” is creating a high low pass. After a post passes to elbow and cuts to opposite block, the flashing offensive player can immediately look to dump it inside to low posted player sealing off zone defender. 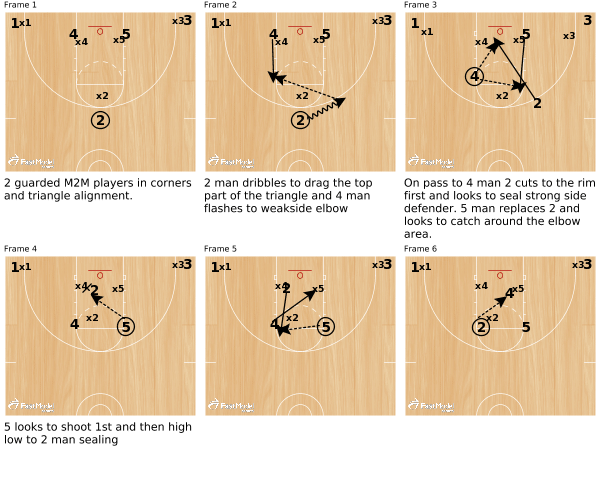 The next offensive set called “KU” puts the two guarded players at the top of the offense allowing three players to attack the bottom of the triangle. I saw Bill Self run this a few years ago against a Triangle-and-Two Defense and it has been in my playbook ever since. It has the same concepts as “3-low” from my previous post on attacking a box and 1 . The initial set up is a double stack low with one perimeter player being guarded man to man with the ball, and the other man to man player on the right block. Post players are positioned at both blocks and other guard not being played man to man on the left block. The play is initiated by a double screen low for the unguarded guard to go baseline and look to receive a pass for a shot. After screening the guarded player then clears out to the weak side elbow area. The ball side post player immediately screens the weak side zone defender for a baseline bounce pass while the screener flashes back to middle of the zone. The point guard then screens away for the other guarded player or they can cut through and exchange. On ball reversal, the guard comes off two baseline screens and looks to receive a pass along the baseline and the strong side post screens away and flashes back to the middle and the continuity continues. 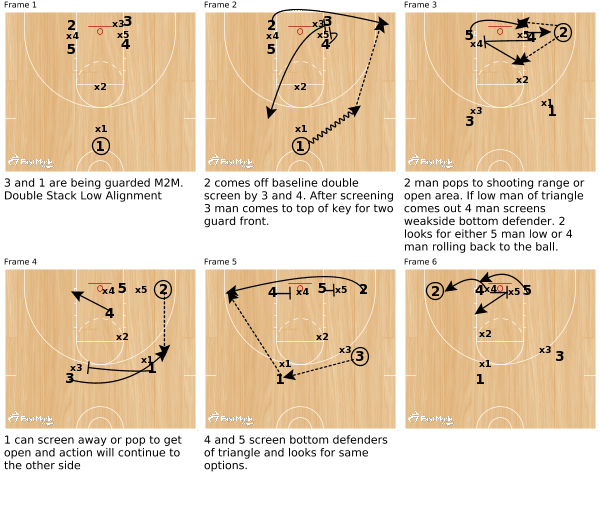 The next concept to think about when attacking a Triangle-and-Two Defense is how to create offensive movement and engage all 5 defenders. Even though it may be unconventional to run against a triangle and 2, the “flex” offense is perfect due to its movement and spacing. The flex involves screening, cutting and ball movement which will engage all 5 defenders in theTriangle-and-Two Defense. Often times coaches get too stagnant against junk and there is limited ball and player movement. When running the flex against junk, teach your kids to run flex to score!!

The last set “under” looks to give you several different scoring options out of one play. The initial alignment is a 1-4 high with one of your guarded players at the point and the other at either the left or right-wing. The play starts with a pass to the high post player on the same sided as the other player being guarded man to man. The post catches and faces while strong side elbow and wing player set a double flare screen for the point guard for a potential quick shot. If the shot is not there the 3 player flashes to the block for potential low post pass if bottom triangle defender comes out. The 5 player then sprints to the wing for a PNR while the 2 and 4 player set a weak side double screen for the 3 man. The point guard comes off the PNR and looks to score, hit the post rolling or 3 player along the baseline. Once the 3 player catches along the baseline, the 4 man slides to mid post and the 2 man continues cut and sets a screen on the bottom defender bringing the 5 man right “under” the basket for a score. 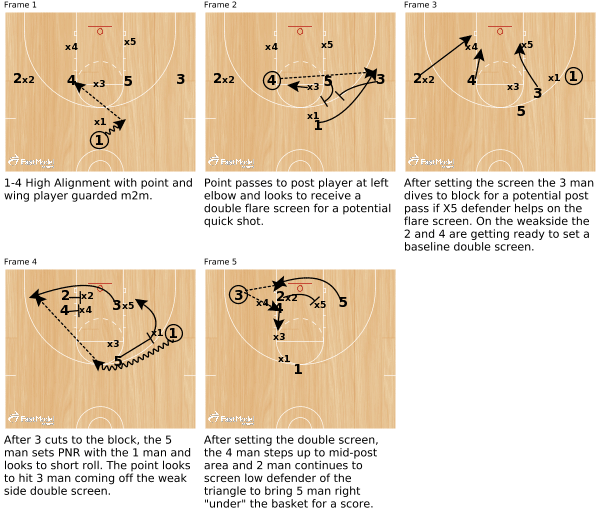 I hope you have enjoyed my four part series on attacking junk defenses. Although we can’t use every good idea or concept we come across as coaches, my goal was to share with you some plays, sets, concepts that have worked for my teams over the years. I hope you can take away something from my series to help your program if and when you see junk defenses. 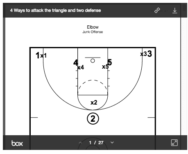 Click on the pdf link below to download the diagrams on: Simple Sets for attacking a Triangle-and-Two Defense

Click on the pdf link below to download the diagrams on: Simple Sets for attacking a Triangle-and-Two Defense