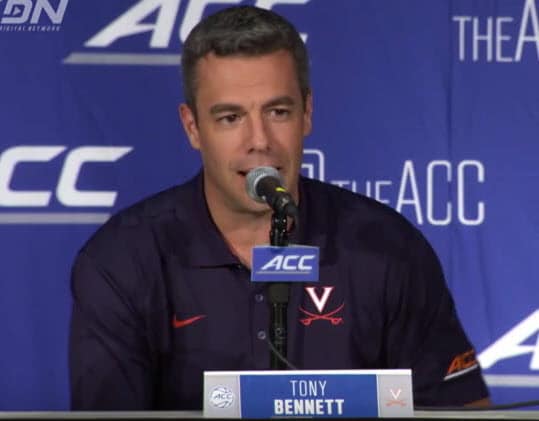 What is going on with the Tony Bennett Virginia Cavaliers right now?

The Tony Bennett Virginia Cavaliers held North Carolina to 43 points in the ten point win last week. It was the smallest sum for an UNC Tar Heels squad in the last couple decades. It was very impressive.

The Tony Bennett Virginia Cavaliers have won three straight, and they are running red hot right now. The opponents for Virginia have outscored them by nine or more points after halftime in the last eight of their nine losses this year. The second half collapse pointed to the fact that they miss playmaker Malcolm Brogdon.

How is London Perrantes doing for the Virginia Cavaliers this season?

London Perrantes has a way of leading his team to wins. Perrantes will be a force behind whatever wins that they accomplish this week. He has had four years of playing at Virginia. He holds the record for career starts at 130.

Perrantes is the guy that gets his teammates set up for the shot. He also has a knack for scoring. He is leading the team in scoring this year.

How is Tony Bennett coaching this season?

I think that Coach Bennett deserves more credit for this year’s job that he as gotten in the press. He has only led the Cavaliers to a combined 89 wins over the past three seasons. This year, they had hope in Memphis Transfer Austin Nichols, but when he was dismissed, then it left a hole in their interior offense.

Coach Bennett lead them to 21 overall victories and 11 wins in the ACC which the same amount as Duke. That is when the conference is as deep as any time in college basketball history.

That is an amazing thing when you consider the contrast in talent with the Virginia Cavaliers and Duke Blue Devils.

The Cavaliers will face the winner of Georgia Tech or Pitt on Wednesday at the ACC Tournament.