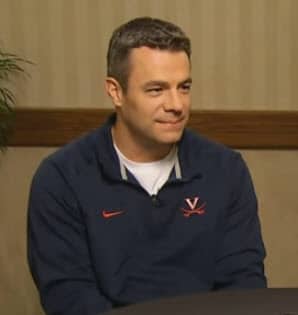 Tony Bennett has changed the whole culture of the Virginia Cavaliers. Coach Bennett came from Washington State where he spent two years. He built his system on Blocker Mover Offense and Pack Line Defense. They are efficient and mistake free on offense.

It might not be pretty, but he is 252-111 in his 11 years of head coaching. He is 107-25 at the University of Virginia. They have developed a system that has interchangeable parts, and he had a plan.

Coach Bennett recruited smart shooters and defenders who can grind other teams down. They are the model of efficiency. KenPom has them as the third most efficient defense and in the top fifteen of most efficient offense. Year in and year out, they are finding the right players.

This season, UVA is KenPom’s third-most efficient defense and 13th-most efficient offense. Last year they were No. 8 offensively and No. 7 defensively. In 2014-15, No. 22 on offense and No. 2 on defense. Bennett’s teams have proven that this is not only successful but entirely replicable with the right players.

You can’t play their style and beat them. They are 3-6 when opponents score more than 60 points. Syracuse did it twice last year and in the Elite Eight. When you play their pace, Virginia will have you. They are awesome just grinding it out. You will fail if you score below 60 points.

Virginia had turnovers that they weren’t accustom to making it versus Syracuse. I think that Virginia will be a tough play in the NCAA tournament this year. The Cavaliers defense is much better this year and they are holding teams down. Virginia is forcing 21.3 turnovers this year. Opponents are shooting worse from the field this year too.

Tony Bennett and his team were just minutes from the Final Four last year. They have taken the right steps to get back there this year.