Here is a Tommy Amaker Harvard BLOB Weak Pin Runner. Amaker has a 351-234 career record as a head coach coming into this season, including a 175-95 record with Harvard. From 2010-2015, Harvard tied or finished 1st in the Ivy League and made the NCAA Tournament four seasons in a row. He made the Round of 32 two years in a row in 2013 and 2014. At Harvard, Amakaer is 84-42 in the Ivy League and has made the post season six different times (CIT in 2010 and NIT in 2011). This season, they are off to a slow 3-4 start, but have a few more non-conference games to play before starting Ivy League competition on January 7th. The Crimson will take on Houston on December 23rd, Howard on December 30th, and Vermont on January 2nd. Harvard is led in scoring by Seth Towns, Bryce Aiken, and Corey Johnson. They are averaging 70 points per game and 16.6 assists per game as a team.

Tommy Amaker Baseline Out of Bounds

The play starts with a screen in by 4 for 2 who cuts out to the corner to get the ball. 5 screens away for 3 in the opposite corner and 2 passes to 3 at the top of the key. 2 and 1 then can choose whether to use the screens by 4 or 5. 2 makes the first decision either cutting back out to the left wing or running across the floor to cut off of 5. 1 reacts to 2 and makes the correct cut after 2 has gone. A natural progression on this play is to have the big step out to set a ball screen once the ball is on the wing. 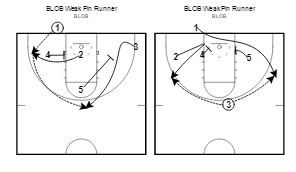