Tom Thibodeau is set up for a Big Season with the Minnesota Timberwolves! Clinic Notes Included 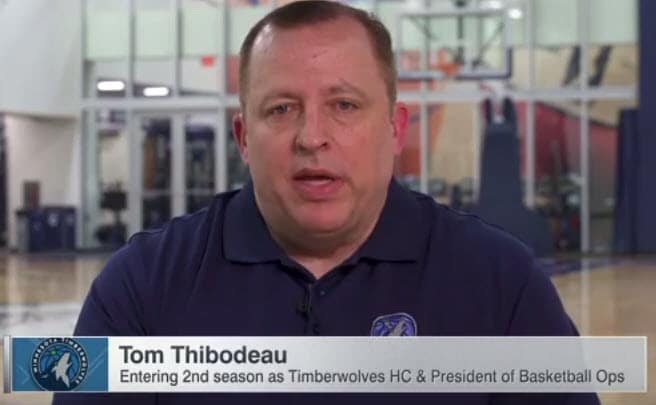 Now it’s time for Tom Thibodeau to make all the pieces work for the new Minnesota Timberwolves now! Check out the Tom Thibodeau Clinic notes too.

The 2017 NBA Basketball Off-season was unlike no other season. We had multiple blockbuster trades that shifted the balance of teams with superior talent, and some teams went different directions. Star players moved around like what Tom Thibodeau put together with the Minnesota Timberwolves.

The OKC Thunder got Paul George in what was an unexpected trade for Victor Oladipo, and Forward Domatas Sabonis without draft picks involved. One would think that the Pacers could have gotten more for Paul George. The Minnesota Timberwolves got Jimmy Butler without giving up any of their best players. The Houston Rockets got Chris Paul from the L.A. Clippers for just a few pieces. The trade helps the Clippers in the Blake Griffin team, and the Houston Rockets get closer to the Warriors.

Tom Thibodeau got Jimmy Butler from the Chicago Bulls. They gave up Zach LaVine, Kris Dunn, and the number seven draft pick which turned out to be Lauri Markkanen in exchange for Jimmy Butler and the number sixteen pick which turned out to be Justin Patton. Thibodeau got the best player in the trade and only moved down nine spots in the NBA Draft for it.

Butler is a real two-way player where his best talents are on both sides of the ball. He will be a great compliment to Karl Anthony Towns, Andrew Wiggens, and the rest of the team. Jimmy Butler will be a great leader in that young locker room as he played for Tom Thibodeau in Chicago.

Butler has a lot of respect for Thibs, and it goes back to his rookie year. He knows how to win and loves that style of play. I think that Butler will be an excellent fit in with their core team.

The Minnesota Timberwolves are now likely a playoff team but should be in the top four of the NBA Western Conference after not making the NBA playoffs since 2004.

Tom Thibodeau came to the Minnesota Timberwolves with a winning resume built on defense. The Minnesota Timberwolves had two options: Thibodeau and D’Antoni. Mike D’Antoni had some bad stints with the Lakers and Knicks, but he would improve your offense. Thibodeau will improve your defense. The Houston Rockets were great this year on offense, but they were below average on defense. It stands to think that Thibs in Minnesota was the right choice as was D’Antoni in Houston. Tom Thibodeau has instilled a winning attitude through his emphasis on defense.

The Minnesota Timberwolves went 31-51 in Thibodeau’s first season and didn’t make the playoffs. They didn’t get the bump in defense as the Timberwolves finished the season with a defensive rating of 109.1 which is 26th out of 30 in the NBA.

Coach Thibodeau had a roster of talented, but young players as he prefers veterans. He made moves like the Butler trade and other moves that rebuilt the roster around stars, and they match Thib’s style of play.

I think that they will be outstanding and a tough team to match on the floor every night. The Timberwolves are going to win some games this year.

Jeff Teague gives them a point guard that can run the pick and roll as well as a threat from the three point line. Rubio couldn’t hit the outside shot, so the defense routinely went under the screens. Gibson is a power player that can score down low and is a tremendous defensive player. He will be a great help to Towns. Butler and Gibson have played in the Tom Thibodeau system and will bring good habits and excellent execution to it.

The Minnesota Timberwolves will have a combination of elite talent and skilled veterans including former players from Chicago. Tom Thibodeau has all the pieces necessary for them to have a big season.