On Ball:
Squared up to the ball; chest to chest/eye to eye. May put head on ball to move offense but do not specifically look to push in a certain direction.

Off Ball:
2 steps to the ball
1 step off the ball line (little more pack style)
Feet are parallel with the ball and their offensive assignment
MUST move on the pass 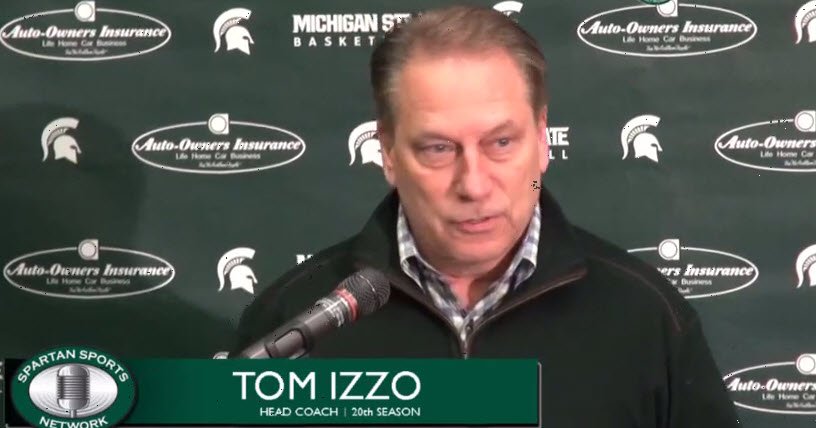 Ball and Gap Defense:
2 lines
Work on moving as soon as the ball leaves the passer’s hand.
Can not leave late!

3 Man Close:
Players close either on ball or in the help position
With the ball at the top of the key
Help defense covers the elbows
Rotate the ball 2-3 times and switch
Izzo has managers to pass but you may have to use players, based on your personel.

3 on 3 Close into Live (Didn’t get the name but it was named after a small college that Izzo got the drill from):
3 on 3 Close to start
Players close on ball and into the help position
Ball is sent to top of the key

Offense passes and basket cuts, finishing the cut on the weakside wing
Defense works jumping to pass and stopping the cut
Defense stops face cut in the paint – This is a program NON-Negotiable

– Weakside offensive player, cuts towards weakside block and then fills top of the key
– Ball handler on the wing, swings the ball to the top and waits to fill the key spot
– After receiving the pass from the wing, the top of the key reverses the ball and now repeats
the drill to the other direction.

2 on 2 Pindown Drill:
Starts with posts for guards but then just continues with guards going for posts.
Catch and pass back to coach then repeat the pindown screen and coverage

Coverage types:
Jam: vs. Middle Ball Screens
Up & Over: vs. Non-Shooting (popping) Post
Up & Under: vs. Shooting Post
Feather: vs. a good guard with a bad on-ball defender

Jam:
vs. a middle ball screen
screener defender “hugs” or goes chest to shoulder of the screener
on-ball defender goes under the screen

Up & Over:
used vs. a non-shooting post that is not a pick and pop threat
screener (post) defender goes inside foot on the screeners heel
post also keeps contact with a forearm on the waist of the screener
post now hedges chest to sideline

Stationary Ball Screen Drill:
2 on 2 specific work on each ball screen coverage
Drill can be slowed or sped up to accommodate the players in the drill
Drill is repetitive and focuses on the ball screen defense

Continuous Ball Screen Drill:
Bigs start on the blocks
Guards at the wings
O & D in each spot
Coach makes the call on how each screen will be defended
Once ball is established on a wing, the defense should be in help positions
If looking to push the ball in a direction, on-ball defender will split the ball-handler’s feet.
Example, pushing left, on-ball would place his feet splitting the offensive players left foot
After the screen, ball is kicked to opposite wing and the drill is repeated on that side
Drill is continuous

Communication Drill:
Great scramble drill to teach defensive communication
4 on 3 with offense stationary
Ball must be defended
Corner must be defended (most often pass made in a scramble situation is wing to corner)
Weak side player must guard 2 and yell “2”
“2” = side of 2
“2” also means I’ve got 1st pass
Teammates must scramble to take next pass
Play continues for a set time or stop, etc.