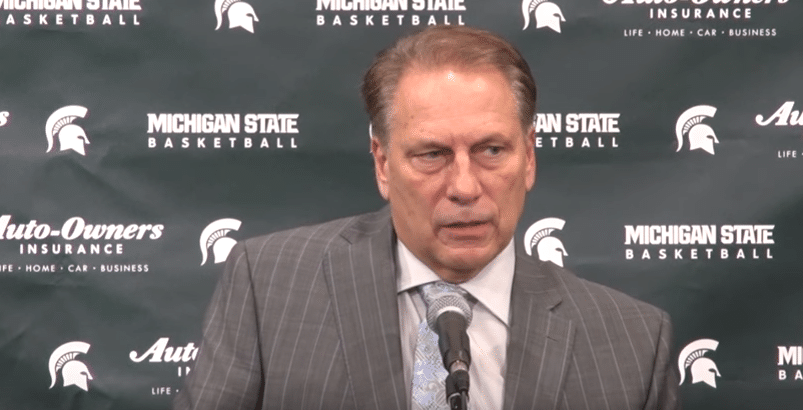 Here is a Tom Izzo Michigan State Blob Fake Pin Step Out Play. Izzo is in his 22nd season as head coach of the Spartans and in 21 seasons has put together a 524-205 record. In 1999-2000 his Spartans went 32-7 and won the NCAA Division 1 Tournament Championship. He hasn’t had a losing season during his time as a head coach and has won 20 or more games in 12 out of the last 13 seasons. Two of Izzo’s players have been named NABC Player of the Year (Draymond Green in 2012 and Denzel Valentine in 2016). He has had eight players earn All-America Honors: Mateen Cleaves, Morris Peterson, Charlie Bell, Jason Richardson, Chris Hill, Drew Neitzel, Draymond Green, and Denzel Valentine. He has had a player win Big Ten Player of the Year six different times (Mateen Cleaves – 1998 & 1999, Morris Peterson 2000, Kalin Lucas 2009, Draymond Green 2012, and Denzel Valentine 2016). He has also had eighteen former players drafted in the NBA Draft. The following are former players that made it to the NBA: Jamie Feick, Mateen Cleaves, Morris Peterson, Jason Richardson, Zach Randolph, Andre Hutson, Charlie Bell, Marcus Taylor, Erazem Lorbek, Alan Anderson, Shannon Brown, Maurice Ager, Paul Davis, Goran Suton, Draymond Green, Adreian Payne, Gary Harris, Kalin Lucas, Branden Dawson, Keith Appling, Denzel Valentine, Deyonta Davis, and Bryn Forbes.

Click on the pdf link below to download the Tom Izzo Michigan State BLOB Fake Pin Step Out: