Here is another ball screen play from Iona Gaels Head Coach Tim Cluess. Cluess is in his 7th season with Iona and has a 238-88 career record (with LIU Post and Iona). Cluess played at St. John’s and Hofstra and then got into coaching at the high school level in the early 1990’s. In 2005, he became the head coach at Suffolk Community College and then in 2006 took over at C.W. Post or LIU Post. Post is a member of the NCAA Division II and under Cluess they went 98-23 including a 30-1 season in 2008-2009. That year, his team made it to the NCAA Division II Elite Eight. In his last three seasons at LIU Post, they went a combined 54-5 in East Coast Conference play and won the conference all three seasons. In 2010, Cluess made the jump to Iona and has won three MAAC Regular Season Championships (2012, 2014, 2015) and two MAAC Tournament Championships (2013, 2016). He has been a huge success at all levels of coaching. At Saint Mary’s High School he had a 25-1 season in 2004-2005 and in his one season at the junior college level his Suffolk CC team went 22-10. 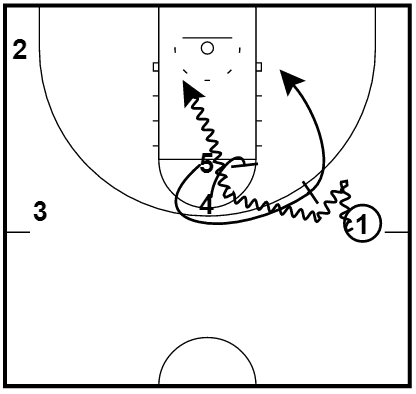 This play was designed for AJ English and overloads the left side of the floor leaving space on the right for English to work. 5 loops around 4 to set a ball screen for 1. As he turns the corner, 4 is there to set a flat ball screen. English has the freedom to navigate between the screens or to work around them both to get into the paint for the score.