This article features a  Tim Cluess Iona Gaels Knicks Flare Set Play.  Tim Cluess. Cluess is in his seventh season as head coach of Iona. In his time with the Gaels, they have won 20+ games each season including 26 during the 2014-2015 season. They are currently 6-3 and have won 6 out of the last 7 games. Iona takes on NJIT tonight on ESPN3 and will play UC Santa Barbara and Towson in the South Point Holiday Hoops Class in Las Vegas, Nevada before Christmas. In his time at Iona, Cluess has helped them get to the post-season each season with three NCAA Tournament appearances, two NIT appearances, and one CIT appearance. Last season, the Gaels went 22-11 (16-4 in conference) and lost to Iowa State in the NCAA Tournament. The Gaels have won the regular season or conference tournament championship for the last five seasons and Cluess has a combined 89-25 record in Metro Atlantic Athletic Conference play. Last season, the team was led by AJ English who averaged 22.6 points per game and made 94 three point field goals on the season. English is playing professionally in Italy for New Basket Enel Brindisi, a member of the first division LBA. 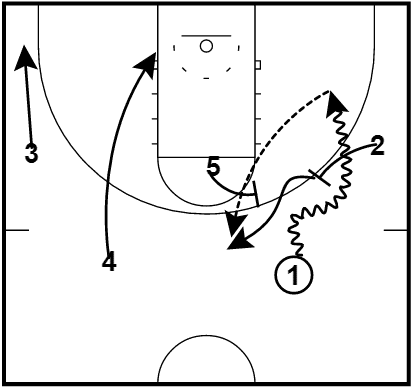 This play starts with a step up screen (or “Knicks” ball screen) for the point guard. As the ball is driven baseline, 5 comes in behind the action to set a flare screen for the guard who just set a ball screen. If the guard’s defender has to show on the baseline drive, 2 may be wide open for a shot on the flare. 4 dives to the opposite block and 3 drifts to the corner to give 1 passing options on a baseline drive.