Players work on getting low and wide and creating rebounding space with their bodies.

Player 1 and Player 2 stand, back to back, in the center of the court. The tip-off circle is the “ring” for this drill. 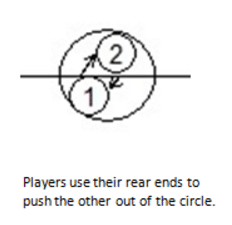 2.Player 1 and Player 2 drop down into box out stance. They use their rear ends to attempt to push the other player outside of the ring.

3.The drill continues until one player has been pushed out.

Would you like to boost the “fun factor” of your practices? And increase your team’s competitive intensity? Try one of these 23 competitive basketball drills next time you’re in the gym!