Here is a pinch post set play from Golden State Warriors Head Coach Steve Kerr. In Kerr’s first season coaching, he led them to an NBA Championship and in his second season broke the single season win record with a 73-9 season. With such a dominating regular season, the Warriors were disappointed to not win a second consecutive NBA title in 2016. Kerr, who had a long playing career, played his college ball at Arizona under Lute Olson. He then went on to play in the NBA from 1988-2003 with the Phoenix Suns, Cleveland Cavaliers, Orlando Magic, Chicago Bulls, San Antonio Spurs, and Portland Trail Blazers. He was a 5-time NBA Champion as a player (4 with the bulls and 1 with the Spurs). He was also the 1997 NBA Three-Point Shootout champion.

The players start in an overloaded set on the left side so that 1 can throw the ball to 5 at the pinch post. This was a great play to use with either Draymond Green or Andrew Bogut at the pinch post since they were such efficient passers. On the entry to the high post, 1 cuts to the corner and 2 cuts around 5 as if cutting to the corner. 2 turns around to get a handoff from 5 to attack middle. As 2 attacks middle, 3 screens down for 1 on the left side. 2 can look to shoot or pass to 1 for a shot.The Warriors would manipulate this action to get Klay Thompson or Steph Curry a shot. The handoff action on right side can also turn into a two man game if the handoff is guarded or denied. 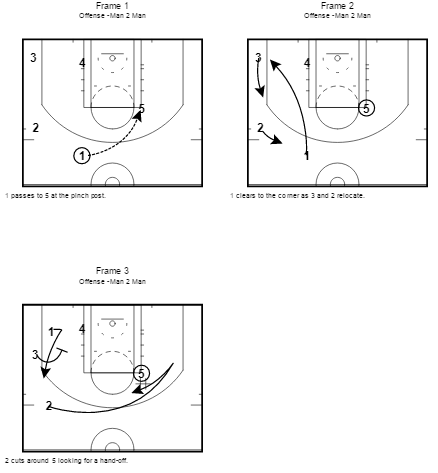