He said that any time that he has applied a little bit of mental pressure, they haven’t handled it very well. Coach Alford was puzzled, because last year’s team played better in must-win situations. They had Kevon Looney, who left for the NBA Draft and was a tough player and Norman Powell, who graduated and is also playing in the NBA. Powell was experienced and hard-nosed. 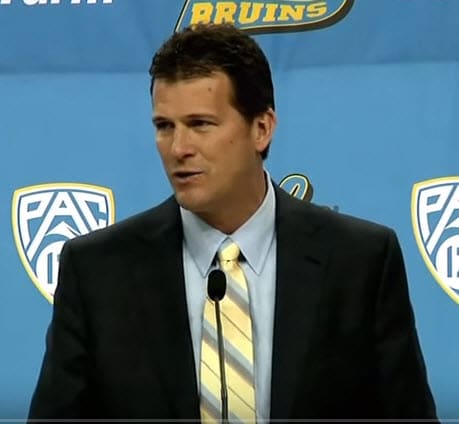 Their team is different this year and they have been focusing on single games and sometimes just a half. The coaches give the Steve Alford UCLA Bruins three keys of what to focus on this game. Some of the team got overloaded from scouting, learning plays, and learning each individual players that they would be against that night.

Right now, Coach Alford hasn’t talked to his team about the NCAA Tournament chances and they are just focused game to game, and if they do that, then maybe they can get on a roll.

Here is the Transition Motion Offense that the Steve Alford Bruins run against most teams. UCLA (14-12, 5-8 Pac-12) can hardly afford another loss, especially at home, where it has lost three of its last four games.