This is a simple quick hitter for Dwight Howard to get a lob at the rim. The Magic first would use the down screen from Howard and pop the guard out for multiple options (shot, step out ball screen from Howard, post feed, etc.). After setting up the defense, 2 curls the screen and re-screens for Howard at the block. It is important for 4 and 3 to be spaced out wide on the right side so that x4 and x3 are pulled as far away from the action as possible. If x2 is still recovering on the curl cut by 2, he may not be able to show on the screen from 2 onto x5. 1 looks to pass to Howard stepping to the rim for a lob dunk. 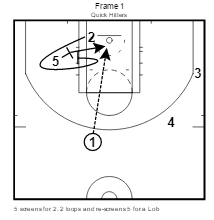