Serbia finished with the Silver Medal at the 2016 Rio Olympic Games after losing to the United States in the final game. The medal gives Serbia it’s first Olympic Medal since 1996 where they received the Silver Medal in Atlanta. In the FIBA World Cup, Serbia has won two Gold Medals (1998 and 2002) and one Silver Medal (2014). The current roster includes tons of talent including: Milos Teodosic, Bogdan Bogdanovic, Nikola Kalinic, Miroslav Raduljica, and Nikola Jokic. The past Serbian teams have also produced talented players including: Vlade Divac, Peja Stojakovic, Dejan Bodiroga, and Predrag Danilovic. Serbia is currently ranked #6 in the FIBA World Rankings and finished the Olympics with a 4-4 record.’ The playbook below features two “piston pin” action plays. The play starts with a piston action from the guard. If he isn’t open, 4 sets a pin down screen for 5 who pops out to the perimeter. Serbia then runs several actions once 5 has the ball.

2 makes a piston cut off of 5 and 4 towards the left wing. If 2 isn’t open, 1 again passes to 5 cutting off of a pin down screen from 4. Once 5 has the ball, he dribbles towards 3 to give him a dribble handoff. 3 uses the handoff to attack middle and uses a high ball screen from 4. 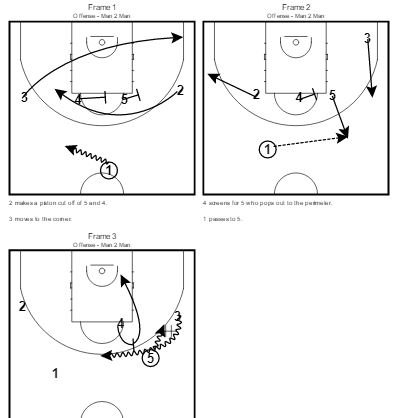