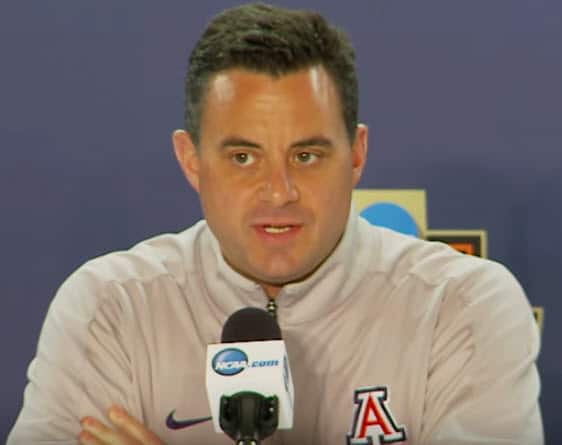 Sean Miller has built a powerhouse at Arizona, but he still hasn’t gotten them to the Final Four yet. This Arizona Wildcats team is his best chance to get there in his thirteen years as the head coach.

Sean Miller is going to sweat this one out too. The man can sweat a little bit. He has a wet dress shirt at every game.

Coach Miller doesn’t seem to sweat the fact that he hasn’t gotten to the Final Four of his 12 years as head coach. Miller got to the Elite Eight with Xavier in 2008 and got to the Sweet Sixteen the next year before he took the Arizona job.

Arizona will play Xavier on Thursday night in San Jose. Chris Mack, his former assistant coach, and the close friend will be waiting on him. I think that they won’t have much trouble with Xavier.

Coach Miller got the Wildcats through this season with only four losses after they lose so many players through injury. They got beat by Butler, UCLA, Oregon, and Gonzaga. Kadeem Allen had a knee injury, and Parker Jackson-Cartwright sprained his ankle badly.

Coach Miller will rely on three first-year students that have experienced the Pac-12 season in which Arizona tied for the conference regular-season title and won their tournament championship.

Xavier will be trying for their third upset win as a number eleven seed, and I think that they will run out of luck. Miller has the more talented and complete squad. If Arizona wins then, they will face the number four seed West Virginia Mountaineers in the Elite Eight. Miller can see the final four, and he knows that he can reach it.

The long road of a season has prepared them for this Tournament. You have to expect the unexpected in the NCAA Tournament.