A big thanks to Nathan Martin for sharing these plays with Men’s Basketball Hoop Scoop. The PDF Playbook below includes two plays from Baylor Bears Head Coach Scott Drew. Drew has won 270 games in 14 years as a head coach. After starting with 8 wins in 2004, 9 wins in 2005, and 4 wins in 2006, Drew went on to win 20+ games in 8 of the next 10 seasons. The highest win total under Drew’s tenure was 30 wins during the 2011-2012 season. Drew got his coaching start as a student manager at Butler in 1991. In 1993, he moved on to Valparaiso as an assistant coach under his father Homer Drew. Once Homer Drew retired, Scott stepped in as head coach for one season. In that one season the Crusaders went 20-11 and made it to the NIT.

This play starts with 1 passing to 4 cutting up from the left corner to the left wing. Once 4 has the ball, 1 runs into the middle of the lane to screen with 2 and 5. 3 cuts off of a triple staggered screen from 2, 1, and 5. Once 3 has cleared, 1 cuts out to the right wing and looks to get the ball. Once 1 has it, 2 elevates up from the block to set a slot ball screen for 1. 1 drives middle and 2 either rolls or pops depending on his strengths. He can also look to pop and drive with the open space on the right side of the floor. 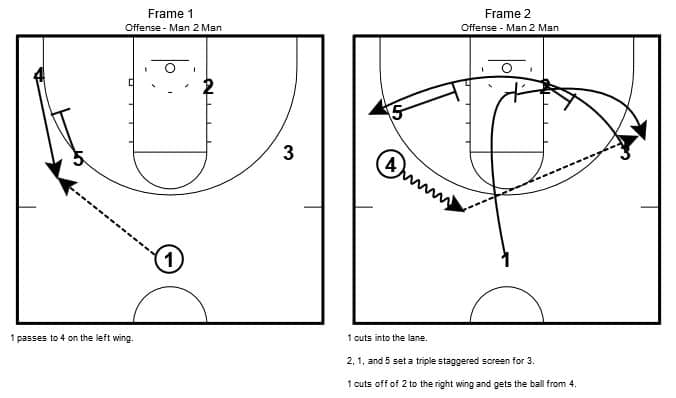 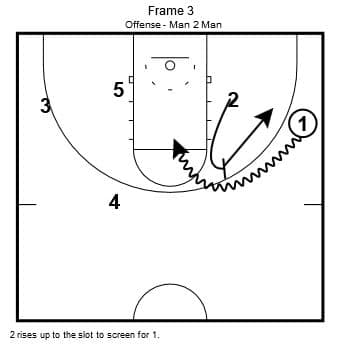 In this baseline out-of-bounds play, 2 starts with the ball, 3 starts just inside the block with 4, 5, and 1 on the left lane line. 3 screens first setting a back screen for 5 to cut to the rim. 4 then screens for 3 who cuts out to the corner for a shot. 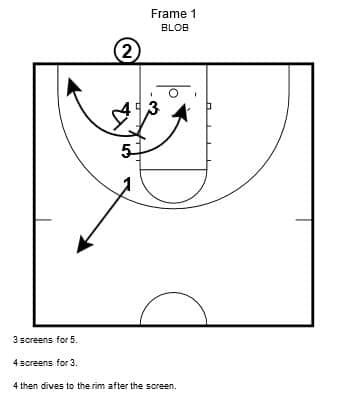