2 screens for 3 cutting across the floor then flashes high to the right elbow. 1 passes to 2, and 2 dribbles middle as 4 cuts around a down screen from 5 at the block. 4 makes his cut from the left block towards 2 to take the handoff. As this is happening, 1 moves down to the corner and 3 moves to the block. 4 drags the ball to the right pulling the help defense that way. 3 can look to post up hard forcing x3 to front or get around him. With x3 on the right side of 3, 3 can get a head start when cutting through the elevator screen from 5 and 2. 4 drags right and 5 and 2 join at an angle just below the left elbow for 3 to cut through. The Bearkats got a huge three-point shot out of this play last season. 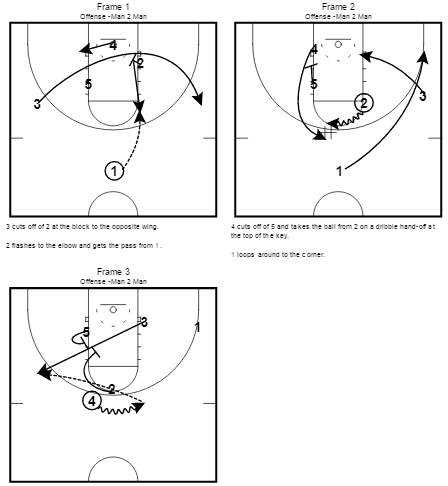