If I could go back and start my first year of coaching middle school basketball over again, I would run a 1-3-1 zone defense all game, every game.

When you coach, every year is a new journey in a “different car.” And in this scenario, you don’t get to pick which car you’ll be riding in – you get whatever happens to be parked in the lot. As a coach, you get whoever is enrolled at your school. Inevitably, the first thing most of us do is start to assess the talent and skill level of our players. One thing that never seems to be consistent is an incoming freshman’s knowledge of good, fundamental man defense. Most kids come in with the idea that man defense means sticking to your man like glue regardless of where the ball is on the court and who has it. And I understand! I think many coaches of the younger kids are inexperienced and just don’t know how to teach it. I’ve been there myself! But my question is, what’s wrong with a zone? I know we hear it all the time – that kid will never play at the next level, because he doesn’t know how to play man defense. In my opinion, zone defenses, when taught well, can help teach kids the fundamentals of defense that will transition into good man defense. In particular, I like the 1-3-1 zone defense, especially in middle school.

The first and most obviously reason I think this zone works best is because it puts pressure on the ball handler. Kids in middle school are generally pretty raw and still developing. Kids are still making mistakes and even at this age a good PG is the nucleus of any team. A 1-3-1 defense brings ball pressure and doubles teams. It’s frustrating and when kids at this age get frustrated, they generally result back to what’s comfortable and familiar – at this age, that generally looks like a head down and lots of dribbling, which is perfect for all the traps in a 1-3-1. The zone also gives all 5 players explicit roles and routines. It moves with the ball and every player is responsible for the efficiency of the zone.

The goal of the 1-3-1 zone defense is to create turnovers. This defense focuses extra pressure on the ball handler and will exert more effort to force turnovers. Turnovers within this defense are created by a couple key features of this strategy. Two defensive players will try to trap the ball handler in one of the corners of the half court. In basketball the ball can only be held for five seconds before passing, shooting, or dribbling. If a player is trapped in the corner they tend to stop their dribble before making a decision to pass or shoot. This creates a problem for the offense but is exactly what the defense wants to happen. When a player is double teamed without their dribble they tend to make poor decisions. Often bad passes and shots are forced out by the player just to get the ball out of the corner. It is vital for players not guarding the ball handler to anticipate a bad pass or shot in order to make a steal or get a rebound. This will help create the most turnovers. 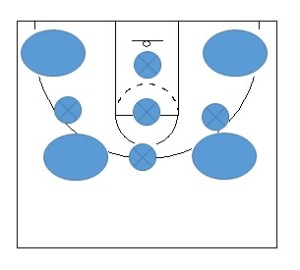 And players move like this: Your PG should be up top guiding the opposing PG to the wing for the trap. Wings are free throw line extended and trap with the pg and then with the big man in the corner. When the ball goes opposite the cover middle for the big man who closes out in the corner and helps trap with opposite wing man. Middle guy covers middle and will generally match up with a guy there. Most zone offenses have a guy in the middle because getting the ball in the middle breaks the zone.

What is great about the 1-3-1, is how it moves. Unlike a 2-3 defense where guys really just occupy a small area, the 1-3-1 is extremely active and requires guys to really move with the ball. Specifically, wing guys have to get to the paint if the ball goes opposite them. This is the same principal as good man to man, help defense. If the ball is 2 passes away, the back side man has to sink with the ball and get a foot in the paint while ball side man should close out.

The 1-3-1 does have its down side. It can leave you extremely vulnerable to shooters in the baseline corners. But from my experience, this has really only been an issue running the 1-3-1 in high school. That corner shot is tough for middle school kids knock down so it wasn’t really ever an issue! 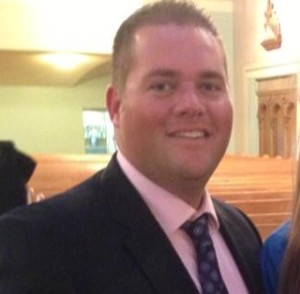