This year the pressure is on the UNC Men’s Basketball program as they began the season ranked #1 in some polls after an off-season of scandal related to Academic Fraud. On the court they are dealing with the injury to their leader and starting PG Marcus Paige.

This is a very nice Roy Williams UNC Secondary Break Set Play out of their Secondary Offense. Beginning with a down screen releasing the wing outside for the pass, he immediately looks inside for a post-up situation.
On the weak side, a double stagger is being set for the shooter who comes off looking for a possible catch & shoot action out of the post-up.

UNC does a very good job running their Secondary actions and this is just one of the gems you can use in your offense at any level. 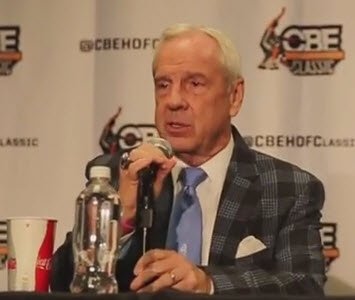 The casual ACC hoops fan thinks of North Carolina basketball and they think up-tempo, run and gun team built around Roy William’s patented secondary break offense. And while that’s true, the best North Carolina teams have always had a couple of big bodies that commanded double-teams on the block. Sean May turned into Tyler Hansbrough who eventually became Tyler Zeller. None of UNC’s bigs have that kind of lottery pick potential, but Meeks, Johnson and James are all above average post scorers. Hicks struggles with his confidence in games, but he’s routinely one of UNC’s best players in practice. If he can put it together this season, the Tar Heels will reach another level.

I think that you are going to love this wrinkle in your secondary break. I hope that you enjoy the Roy Williams UNC Secondary Break Set Play