Roy Williams Transition Offense by Ben Farquhar.  Check out his 17 pages of basketball diagrams included too!

Roy Williams Transition Offense has been one of the more popular secondary sets used throughout all levels of basketball for years now. One of the advantages of his system is that all the positions are interchangeable and as a coach it allows you to put players in spots that play to their strengths.  Williams preaches six keys to his offensive philosophy:

Standard break with Cross screen action:
Williams demands that one big trails and the other sprints to the front of the rim whether it be a make or miss. The wings are flying down the sidelines to the corners, and the first look is always a posting big. If the ball doesn’t go inside, then they are into their standard secondary break. As the ball is reversed around the perimeter, the 5 is tracing the ball and the players are looking to throw it in. On the rear screen from the 2, that could be a lob to the 4 as he attacks the rim. If there is no lob, the 2 pops for a catch, and the 4 cross screens the 5 and we have basic hi-low action. It is important that the 5 go on the low side of the screen as it gives more space to the 2 if he decides to attack the rim. 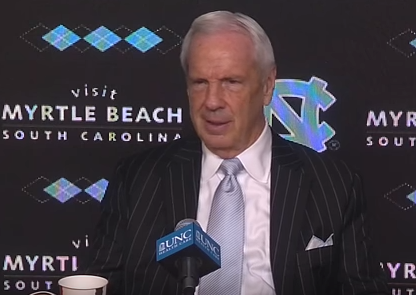 2 man game:
There are several other options and reads based off this action which makes it hard to scout defensively. Some teams will try to deny the reversal to the trailing big, when this occurs, the big will set a down screen for the 3 man and they will play a 2 man game on that side. The ball goes from 1 to 3 and the big will sell a cross screen, flip, and seal trying to post. As this action occurs, the 5 rises up the lane line taking his defender away from their help responsibility. The 5 and 1 will set a stagger for the 2 as they occupy the help defenders allowing the 4 and 3 to play a 2 man game.

Drag screen:
If you have a PG who is good in ballscreen situations, a drag screen from the trailing big is a great way to start the action early in the shot clock. As the 1 comes off the screen, the 5 is tracing the ball, and the 2 is hitting the block and rising for a backscreen. This backscreen of the screener has a lot of similarities to the “Spain Pick and Roll” action that is very popular in the NBA right now. If there is nothing for the 1 to attack, then the 2 pops for a catch and he goes two man game with the 4. Just like in the previous play, the 5 rises the lane line and sets a stagger with the 1 for the 3 to occupy the helpside while the 4 seals.

Wing Ballscreen:
The next Roy Williams Transition Offense option allows your best wing player to get into a ballscreen with the first big down sprinting into a screen. This could either be a call or by having the 1 dribble at the 4 sending him backdoor, your players will know the next action. It is important that the 3 not creep over for the catch and stay spaced on the wing. As the ballscreen occurs, the 2 is setting a cross screen for the 4 to trace the ball as the 3 comes off. Just like the drag screen, the 2 will continue through to set a backscreen for the screener as he rolls hard to the basket. As the 3 comes off he should be thinking attack first, then look cross screen, and finally the lob to the screener.

Quick action:
Starts as their standard secondary break with the trailing big catching the reversal pass from the PG. The 5 is still tracing the ball movement as he works his way around the rim, and the 2 is walking into the strong side block to rise up for the rear screen. On the catch by the 4, he is pass faking hard to the 3, and kicks back to the 1 at the wing. As the ball is in flight, the 2 rises for the rear screen and the 4 dives hard to the strong side block and tries to seal. If there is no pass able to be thrown by the 1, the 5 flashes to the free throw line and we can go hi-low from here.

Screen the Screen action:
This North Carolina Transition Offense action is perfect to get a guard in the post off of the regular action. It is the standard action to start, however right after the rear screen is set by the 2, the 5 rises to screen the 2 to the block. This screen the screener action will be perfect against defenses that help on the rear screen and are therefore already behind the 2 by the time he gets to the block, thus leaving an open post entry.

Follow Screen:
This last Roy Williams Transition Offense action could be useful with a stretch 4 and a guard who is good in ballscreen situations. Standard action but on the reversal from the 4 to the 3, the 4 follows into an empty ball screen as the 2 sets a cross screen for the 5 to trace the ball as it comes off the wing. The 4 in this circumstance could pop or if you like the spain action, the 2 could rise to set a backscreen sending the 4 to the basket. You could also roll the 4, send the 2 behind the screen, and have roll and replace action for a throwback to the 2.