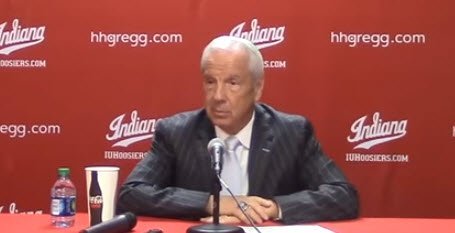 A “Thank You” to Coach Dana Beszczynski for the Roy Williams North Carolina Tar Heels Gate Set Play. Coach Beszczynski is an X’s and O’s guru. He scouts all over the world and brings you the best basketball plays.

A very good play designed by Coach Roy Williams of the Tar Heels coming out of a television timeout against Tennessee Sunday night.

What looks like a simple “gate action” turns into the inside man timing his slip perfectly to the basket for a quick feed and dunk.

After losing graduating seniors and 2016 NBA Draft Picks: Marcus Paige and Brice Johnson. Hardly anyone thought that the University of North Carolina basketball team would do much this season, but they won the the Maui Invitational, and by quite a pretty sweep, it began to look like perhaps North Carolina would be just fine. They looked like one of the most talented teams out there to me. They are 7-0 right now and then ran into then-ranked #13 Indiana. The Hoosiers had arguably been the toughest game UNC had played so far, but the loss once again raised familiar doubts about the Tar Heels. UNC bounced back against Radford in a stunning 45-point win.

North Carolina will need to learn how to play in the absence of key players, if ever needed, if they want any shot at making the run that they did last year. You will never know exactly how this team is going to gell in the conference season. Coach Roy Williams will probably have them fine tuned by the NCAA Tournament. They could do some damage in the tournament this year.