Role of the Assistant Coach by John Saintignon

The role of the Assistant Coaches: The definition is: A head or assistant coach is any coach who is designated by the institution’s athletics department to perform coaching duties and who serves in that capacity on a volunteer or paid basis. I have been asked many times what is this role? I have served as a Head Coach for a number of years and I have also been in that Assistant Coaches role. Both have their complications but I will address the role of the Assistant as that is a subject that needs to be defined and not just expected that those under your supervision will be doing exactly what you are asking them without providing them with what they should be doing.

1. Loyalty: The assistant coach must support the Head Coach in all efforts.

2. Integrity and Values: They are a reflection of the Head Coach.

3. Character: It is what they are when no one is around. That means no gossip, talking behind back Head Coach, Players, Management.

4. Enthusiastic: They must bring a level of enthusiasm to practice every day.

5. Motivated: Motivation gets them going. If Assistant is motivated, and Head Coach are motivated, the players will be motivated. Make motivation a habit.

6. Goal-setters: Assistant coaches should be setting goals for their own coaching careers. And, if they exhibit the above traits, Head Coach should assist them in achieving those goals.

To be a good assistant the individual must want to coach in the system they are in. A coach who has the background and the abilities, but isn’t happy with the situation, may wind up doing more harm than good to your program. We would be better off with a person who has the desire, but not the experience to assist you.

The role of the assistant coach is one of long hours, low pay, and often little recognition. It is up to the head coach to show his loyalty to the assistant coach. Give credit when credit is due. If the assistant did something to help the outcome of a game, let the media know it. On the same hand, if they make a coaching mistake, support them.

When an assistant needs to be corrected or criticized, do it in private. And, never do it in public or in front of your players. Be open with your assistants-encourage them to brainstorm with you. The more they feel ownership of the program, the more they will do to make the program a success.

Help them get a head-coaching job. If they have a desire to be a head coach, and they are prepared, do everything possible to assist them. Write a letter of recommendation and make a phone call on their behalf. Don’t be neutral-if they’re not ready, tell them why they are not ready. Evaluate them so they can grow!

a. Prior to the game: strategy – may be asked to write the game plan and match-ups on the board.
b. Check the scorebook for accuracy prior to the game – the worst thing you can do is to start the game with a technical because no one checked the book.
c. During the game: sit next to the Head Coach-Keep key game information charted. It may be to keep track of the fouls, timeouts or other pertinent game information.
d. Take game notes for half-time adjustments
e. Have the dry erase board available for the Head Coach during time-outs.
f. Help the Head Coach with Post Game Evaluation

Understand the head coach’s philosophy
Understand the head coach’s playbook
Understand the head coach’s preferred techniques
Scout other teams, have written report 3 days prior to game.
Make sure the floor is clean
Provide basketballs and keep track of them
Assure that basketball are properly inflated
Return the basketballs to their storage area after game or practice
Make sure the first aid kit is available and complete along with trainer
Make sure ice is ready for games and practice
Enter the player names into the score book
Complete shot charts and statistical information
Coordinate volunteers for videotaping
In practice, assist with groups of players during breakdown drills
In full court practice, cover distant areas of the court and be a referee
Maintain team discipline when head coach is gone
Assist with clinics
Educate yourself by reading, attending clinics, coaching younger teams
Be a role model for sportsmanship
Follow all the team rules, just like a player is expected to follow them
Discuss the game plan with the head coach so you’re familiar with it
Advise coach during game as established beforehand
Tell the coach of all player injuries
Assist players with minor first aid needs
Advise coach of player confidences if urgent enough
Offer observations during the game by looking for the things the head coach may not notice.
Make sure the head coach has necessary tools such as clipboards and markers
Assist with video review and note-taking
Maintain comfortable conversational relationships with players
Dress respectably. At games.
Again, dress respectably. Look like a professional coach in practice.
Keep the players in line concerning language. No profanity.
When players come out of the game, help them with suggestions
If players get upset, act as a buffer between them and the head coach
Listen for signs of internal strife among players
Enjoy yourself. Cherish every minute of your coaching privilege.
Here is an example of what I had my Assistants responsible for in High School. See if this is what you are doing for your Assistants.

Managers Recruiting Complementary Tickets
Equipment Recruits who are at the game
Work out players prior to team meeting Work out players prior to team meeting
Watch opponent warm-up Watch our warm-up (includes run 4 on 4 shell)
Sit in seat nearest to team Walk on the court with the team
Opponent scout chart their offense Sit between Dwayne and Phillip
Note possessions without post touches Opponent scout charts their offense
Focus on our post play Focus on our defense and guard play
At time out kneel in front of 2/3s closet to table
At Half: 2 or 3 key defensive adjustments At time out stand directly behind me (let me
know of any substitutions and time)

At half: overview/ 2 or 3 offensive adjustments note key statistics

I suggest a pre game checklist for each
Post game: console or cheer up players
Speak with parents and boosters
Attend any post game booster function 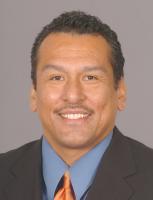 John Saintignon has an extensive background of an experienced and successful basketball coach at the International Professional, NCAA Division 1, NCAA Division 2 and High School levels — and a three-time NCAA All-American as a player and a professional player. Coach Saintignon has been helping players and their families navigate through the NCAA process of helping them get a college scholarship, having wrote a book on the subject while at Oregon State University, “ What does it take to get a college scholarship?”, as well as preparing them for the court. Coach Saintignon trains the athletes and provides performance nutritional advice working alongside Advocare to help his athletes reach their fullest potential. FB: JSSportsNet and at www.advocare.com/130423949

Saintignon was the Head Coach of Fuerza Guinda of the FIBA Americas; Coach Saintignon led his team to a Playoff finish. During the 2011-2012 season of the NBA lockout, Saintignon was instrumental in getting NBA players into jobs overseas having placed Jarron Collins and Mardy Collins into the CBA in China, Salim Stoudamire into Italy, Sam Clancy into Argentina, James Porter into Japan, Calvin Hampton into Bahrain. Over a 100 players have come through Los Angeles to get player development training including the future Hall of Famer NFL Defensive end and Superbowl winner Simeon Rice who came out to LA to train for 3 days in strenuous basketball training with Coach Saintignon.

Saintignon has been a coach in high school, college and professional basketball in Arizona, California, Oregon, Mexico and Bahrain. Most recently, Saintignon was the successful Head Coach in the Premier League in the country of Bahrain in the Middle East since March 2010, leading his team to a Final Four finish. Prior to that he was the Assistant Coach at Cal State Stanislaus University in the CCAA Conference and an NCAA Division 2 institution. Saintignon was also the Associate Head Coach and Director of Player Development for the Culiacan Caballeros of the top league in the Mexican Professional Basketball League (LNBP). As a first-year franchise, the Caballeros went to the LNBP playoffs in a top 6 finish.

As a guest speaker in Italy, Croatia, China, Colombia, Dominican Republic, Bahrain, Mexico Israel and Argentina, Saintignon has earned a reputation as an authority on player development and has produced several DVD’s on getting athletes better through individual training; “Advanced Guard Workout” is the title, as well as attacking on offense with his Secondary Break philosophy, called “On the Attack: Mastering the Secondary Break.”

Saintignon graduated from the University of California at San Diego in 1990 with a bachelor’s degree in Economics, and a Master’s degree from Liberty University in Sports Administration. He played one season at UC San Diego and three seasons at the University of California at Santa Cruz. In 1985-86, he was the Leading Scorer in the United States (USA) as he led the entire NCAA Divisions with 31.2 points per game scoring average. He earned All-Conference MVP and All-American candidate honors all three of his years at UC Santa Cruz as he scored more than 2,450 points in his career where he is the All-Time scoring leader in University history as his number was retired this year. He went on to play professionally in Spain and Mexico for four seasons earning various honors including several All-Star selections.

A native of Tucson, Ariz., Saintignon graduated from Salpointe Catholic High School where he was inducted into the Athletic Hall of Fame in 1998. Saintignon has been married for 16 years to Angelica and they are proud parents of their two sons, Vicente (14) and Sebastian (11).

Role of the Assistant Coach by John Saintignon