Serbia just squeaked by in Group A to make it to the knockout rounds of the Rio Olympics. Serbia is 2-3 beating Venezuela and China. Serbia played the United States to a three point game and outscored USA in the fourth quarter, but it wasn’t enough to beat the Americans. Serbia will now face the top seed from Group B in the knockout quarterfinals. Serbia finished 4th in Group A behind 1) USA, 2) Australia, and 3) France. The Serbians are 6th in the FIBA World Rankings and led by Milos Teodosic (CSKA Moscow), Bogdan Bogdanovic (Fenerbahce), Miroslav Raduljica (EA7 Emporio Armani Milano), and Nikola Jokic (Denver Nuggets), Raduljica leads the team in scoring with 17.6 points per game followed by Bogdan Bogdanovic with 13.4 points per game. Coach Sasha Djordjevic is the Head Coach assisted by Jovica Antonic and Miroslav Nikolic.

Serbia runs this play to create multiple scoring cuts from an overload set. Once the ball gets to 4 on the left wing, 1 sets a shuffle screen for 3 on the wing and 5 screens down for 2 in the corner. A lot of teams run this action with either 1 setting a screen for 2 to continue the play or running 1 off of the screen from 5. 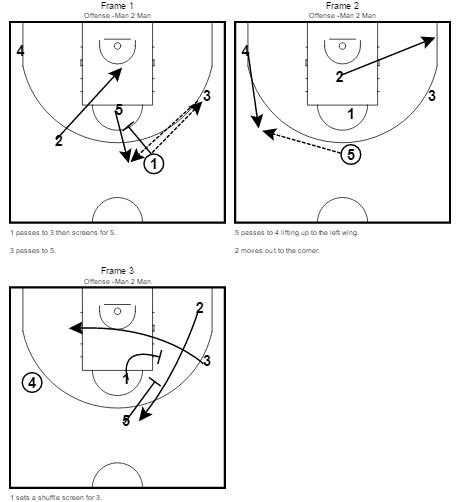 2 makes a zipper cut off of 4 to get the ball from 1. 2 gets a high ball screen from 5 at the top of the key. 2 can use it or turn it down to attack into the lane. The opposite big man can either space out to the wing or look to duck in the post while his defender helps on the pick and roll action. 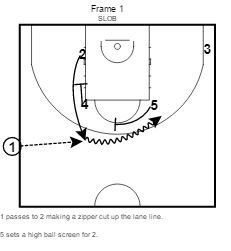 ← Prev: Rio Olympics - Australia Set Plays vs. USA Next: After Timeout Sets for Your Next Huddle →