Lithuania Set Plays: Here are two set plays from the 2016 Rio Olympics. Lithuania beat Brazil in a hard fought game early in the Olympics and will be a tough team moving on into the rest of group play. Lithuania is the 3rd ranked team in the FIBA World Rankings and is led in scoring so far by Mantas Kalnietis. Jonas Maciulis and Paulius Jankunas are also scoring in double figures for Lithuania. Jonas Valanciunas is averaging 8 points per game and 4 rebounds.

The video can be found on Facebook by clicking the link below. The first play shows a Rocket Action with a quick pass out of a high ball screen to the opposite big. The second play shows how Lithuania runs a diamond set into a side ball screen.

1 dribbles off of a high ball screen from 5. 5 rolls hard into the lane. If x5 shows or attempts to hedge, 1 can quickly pass to 4 who pops out to the perimeter. The spacing allows 4 to make an easy pass to 5 near the rim for a layup. 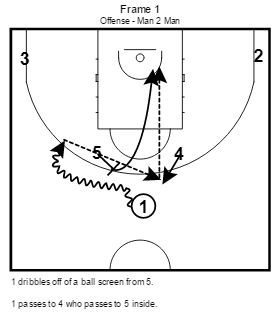 To get into this play, 2 ran into the lane cutting around 4 to form the diamond shape. 2 cuts off of 5 to the left wing and gets the ball. 4 sprints out to set a wing ball screen for 2 as the other players space out on the right side of the floor. As 2 attacks the middle, 4 can roll or pop for a shot. The quick action of this play makes it hard to defend the ball screen and the initial screen from 3 on 4’s defender can put x4 at an immediate disadvantage. 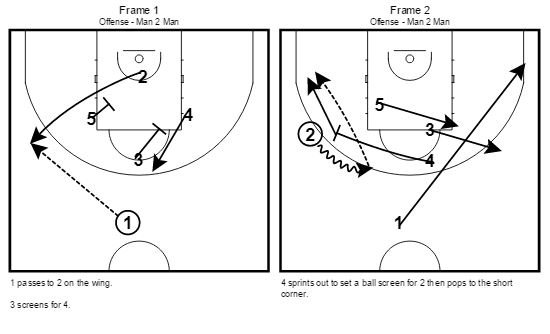 Lithuania Offense from the Rio Olympics