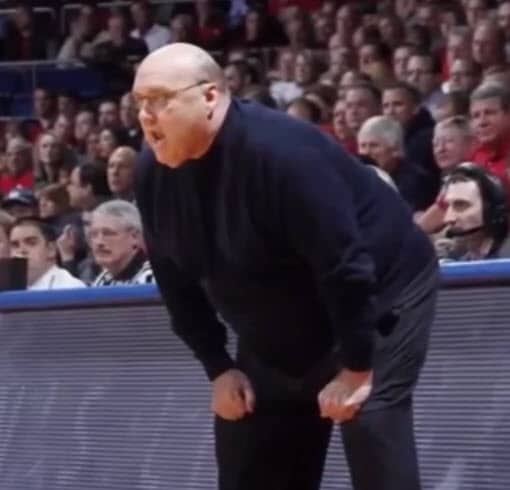 Rick Majerus was an American college baskeball coached with an extensive coaching resume. He began his coaching career as an assistant for Marquette in 1971 and continued in his role until 1983 when he became the head basketball coach for Marquette University for the next three years. Coach Majerus had a short stint in the NBA as an assistant coach for the Milwaukee Bucks from 1986-1987. He then took over Ball State University before becoming the next head coach of Utah University for the next 15 years – a period in which included serving as an assistant for legendary Don Nelson for the US national team in the 1994 FIBA world championships that won a gold medal.  The Rick Majerus Triangle & Two Defense is something that can help your team out in an difficult situation.

Coach Majerus led Utah to a final four appearance in which they fell to Kentucky in the national championship game. After 2004 season, coach Majerus worked as an analyst for ESPN for three years before accepting his final coaching job at Saint Louis University. In 2012, he led the Billikens to their first NCAA Tournament in 12 years, and their first appearance in a major poll in 17 years.

Rick Majerus was known for his articulate attention to detail in all aspects of the game. Be it his 4-out 1-in motion offense, man to man defense or even his junk-up defense of Triangle and two presented in these notes.

This defense is mainly used as a junk-up defense vs teams with two great scorers and/or shooters to disrupt the offensive flow of the opponents. It is to compliment a team’s base man-to-man or zone defense. It is not something that can be used throughout the whole game. Coach lays out his philosophy on playing this defense and provides many teaching points for both matched-up defenders and the triangle zone. Roles and responsibilities of all areas of this defense are addressed in these notes including philosophy on transition defense when using this defense.
Coach Majerus also battled health issues for many years which then forced him to step aside from Saint Louis in 2012. Shortly after, he announced his retirement from coaching. Coach Majerus died of a heart failure in a Los Angeles hospital December of 2012.

If you are looking for a hybrid defense to add to your base defense, then triangle and two might be something to consider. I hope you find these notes useful for your team and program.