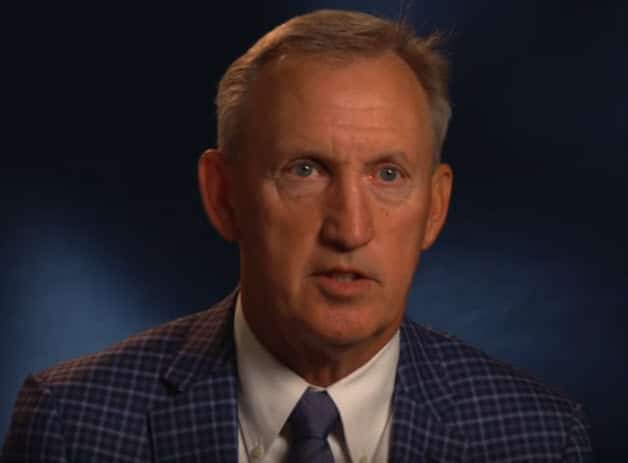 The guard exits over the top of the 4 man to the wing and the point guard passes to him and then cuts away. At the block/short corner area the 3 man cuts across to ballside corner taking his man away from help. After the 2 man catches the pass the closest big, in this case the 4 man, will sprint out for a ballscreen and slips to the rim with the floor spread. As the 4 man slips the ballscreen, 5 lifts to the high post to pull his man out of the paint allowing the floor to be fully spaced and the slip to work. 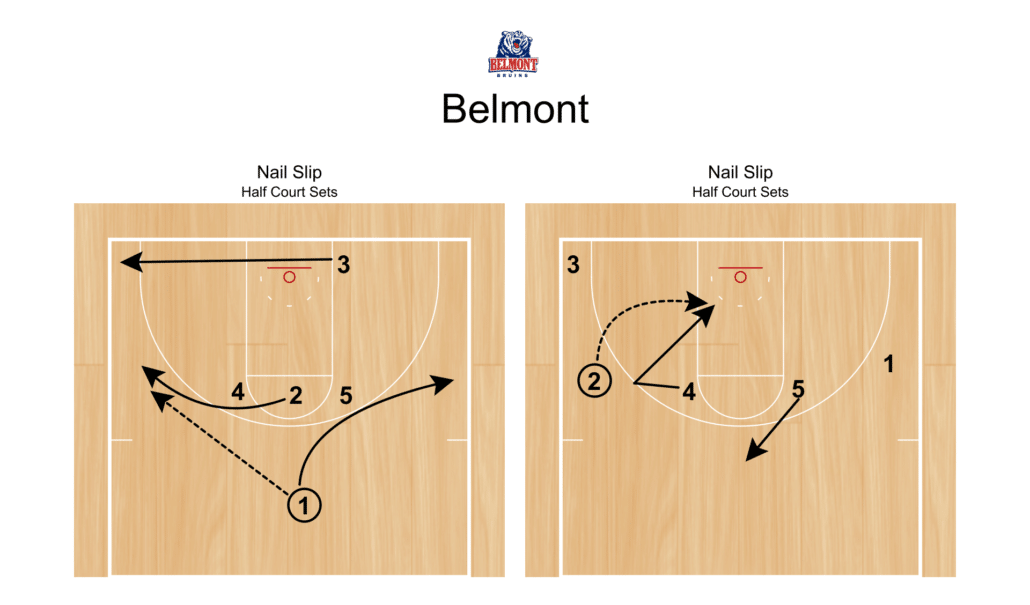 The same action occurrs with the 2 man cutting over the top of 4, but instead of to the wing he relocates to the corner. Simultaneously the 5 and 3 men clear out to the corner and short corner opposite leaving the 4 man the elbow alone to step up for a ballscreen for the point guard. Belmont has good shooters at the 4, so this is a great set for a pick and pop between 1 and 4 to the middle of the floor. 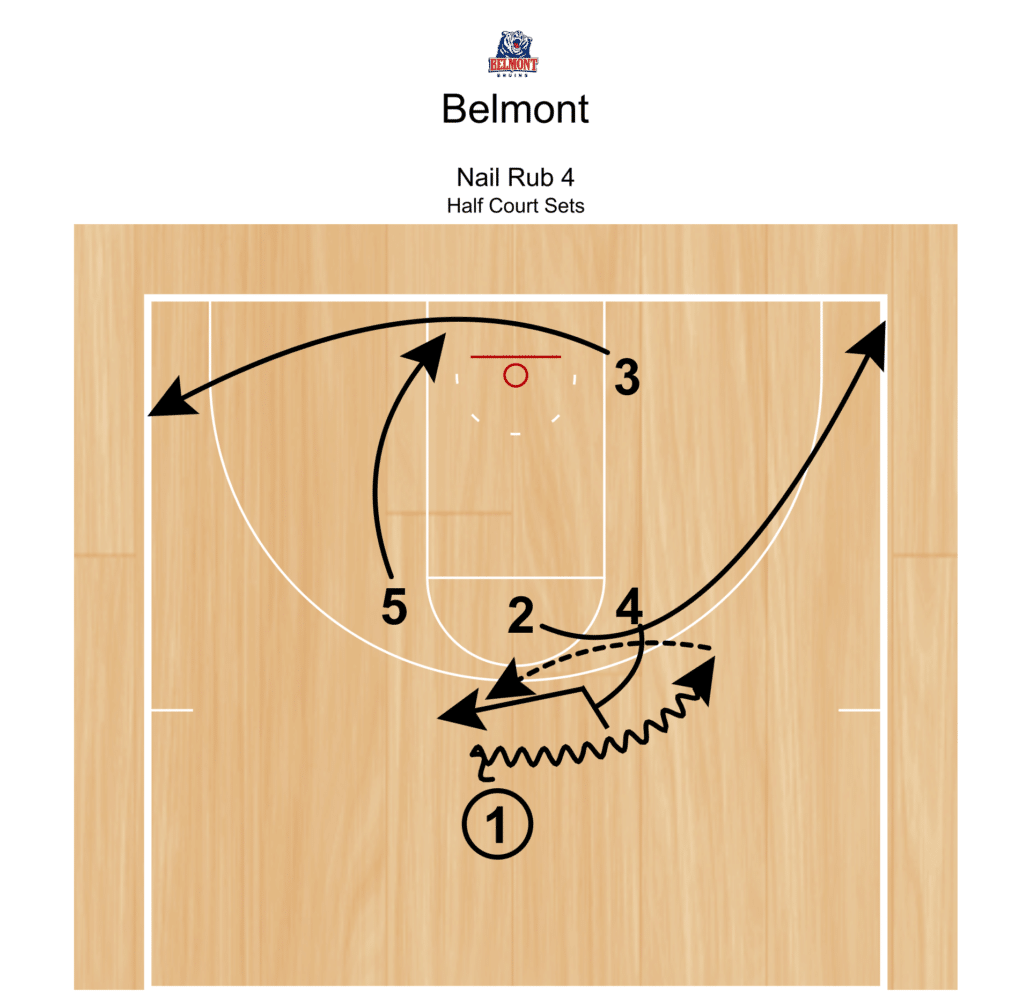 As always the 2 man cuts to the wing and receives the pass from 1 who cuts away, but the difference here is the 3 man goes to the opposite corner to space the floor. The 2 man attacks the basket forcing x4 to help into the paint or sag of his man on the drive or else 2 can get to the rim easily. Since this set is designed to force the big to help, after 2 attacks both bigs at the elbows turn and set a stagger throwback screen for the point guard to look to get a shot. 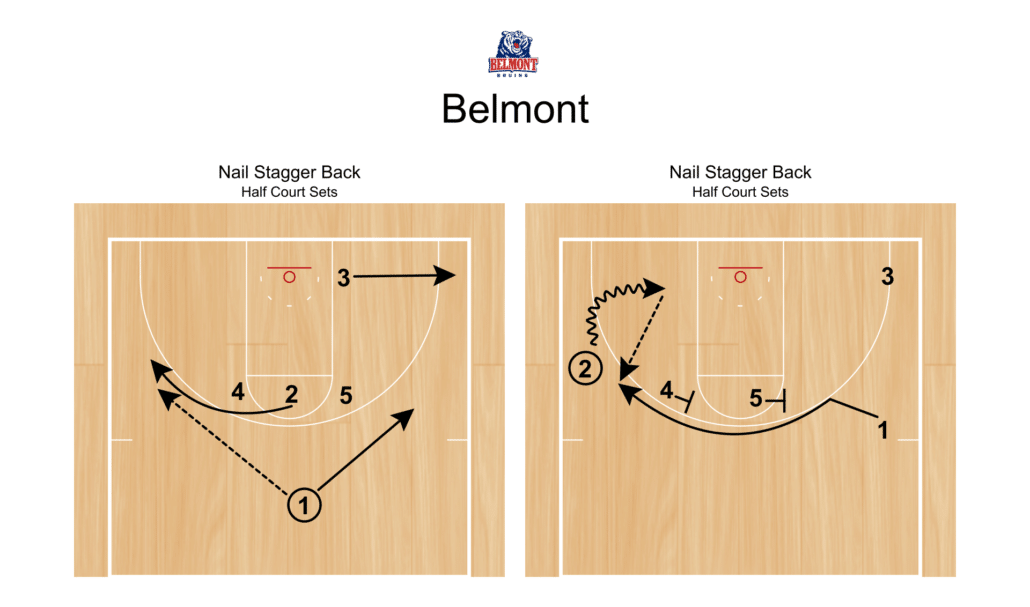 The guard you want with the ball in his hands cuts over the top of 5 to the wing, and the point guard cuts away as typical. 3 then sets a cross screen for the 4 man to look to either get a quick score or a post touch if the initial scoring opportunity is covered. If nothing is there or if x3 overhelps on the cross screen then 3 comes off down screen from 5 to look to get a shot. 2 makes the decision for whichever man is open and makes a play off the screen the screener action. 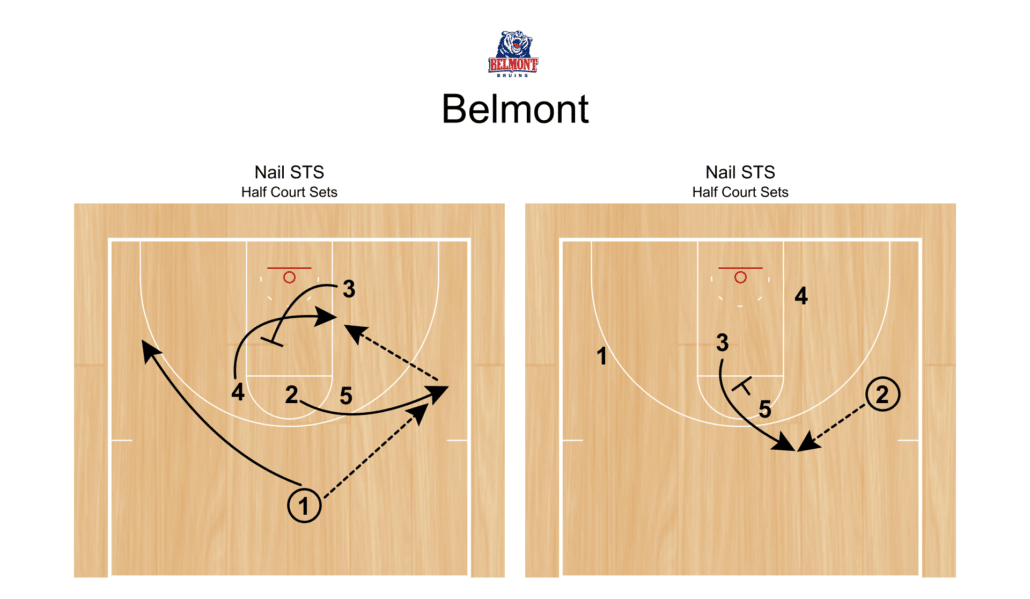 The guard exits to the wing over the top of 4 and 1 passes to him and cuts away. As a counter to the screen the screener set, 3 fakes the cross screen and sprints through elevator doors through 4 and 5 looking to get a shot.