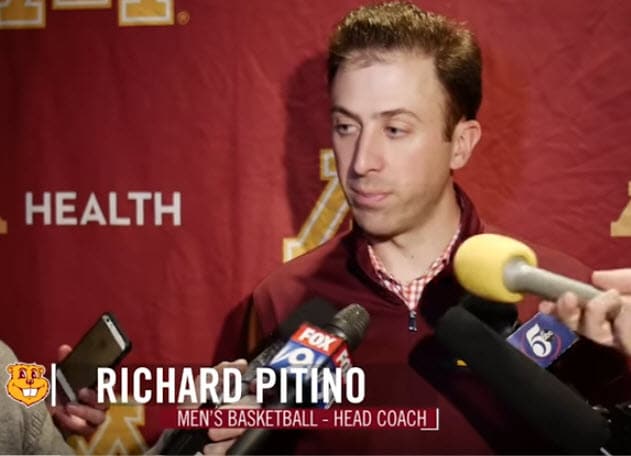 The Richard Pitino Golden Gophers Set Plays by Dana Beszczynski will give you a small sample of what the Minnesota Gophers used this year on offense. Coach Dana Beszczynski is great at breaking down offenses and defenses. I hope that you enjoy the plays that he has drawn up for you.

How did the Golden Gophers do this season?

Richard Pitino is very proud of their twenty-four win season. The Minnesota Gophers went from eight wins last year to 24 wins this year. The Gophers just ran out of steam from all their hard work. Executing a turnaround like this one requires a lot of work.

They started off with eight straight wins and then had a 3-6 Big Ten start, then they ended the season with a winning Big Ten conference record in the last 12 years. It was their best win total in 20 years.

The Golder Gophers were 24-10 this year and lost in the first round of the NCAA Tournament to Middle Tennessee. They were one of two higher seeds to lose in the first round games. Sixteen victory improvement was the best in NCAA Division 1 this year.

Coach Pitino played his top seven players and had to drop the rotation to six when Akeem Springs hurt his Achilles tendon in the Big Ten Tournament. They had injuries to their point guard Nate Mason with a hip injury. They weren’t very deep late in the year.

How will the Golden Gophers do next year?

They will only have one senior next year from this year’s rotation. The Gophers will have a lot of potential with Power Forward Davonte Fitzgerald who is a Texas A&M transfer.

The Golden Gophers will be adding two highly recruited first-year students in point guard Isaiah Washington and shooting guard Jamir Harris. They ranked in the top 100. Washington was considered the best point guard in New York.

Who is in Rick Pitino’s coaching tree?

Richard Pitino is the Big Ten Coach of the Year. He and his dad; Rick Pitino were the first father-son combo in the NCAA Tournament.

Rick Pitino has a HUGE coaching tree other than his son. They include Mick Cronin of Cincinnati, Kevin Willard of Seton Hall, and Kevin Keatts who was named the NC State Coach today.