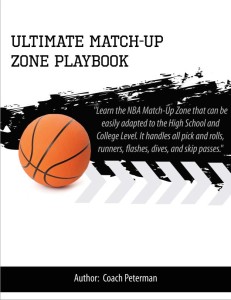 I have decided to offer this New playbook for $11.95 for the first 24 Hours. It has 27 pages of detailed information on how to run the Ultimate Match-Up Zone Defense.

I have watched tons of NBA Basketball teams and believed that this match-up zone is the ultimate match-up zone defense. I believe that is the case because it deals with every scenario when it comes to a ball screen and all the different pick and rolls.

This match-up zone defense will help develop your player’s communication, stop great scorers, great scoring teams, employ man defense principles, and be difficult to scout. It can be used with big and small teams.

This NBA Match-up Zone can be utilized on the College and High School levels with ease. You will have the ability to confuse your opponents with a new wrinkle in the late half of the basketball season and especially for the play-offs.
You will understand how to “match-up” and cause confusion for the zone offense. It will disrupt their offensive flow.

I hope that you enjoy this “Ultimate” Match-up Zone Defense Playbook and that it produces wins for you in the play-offs.