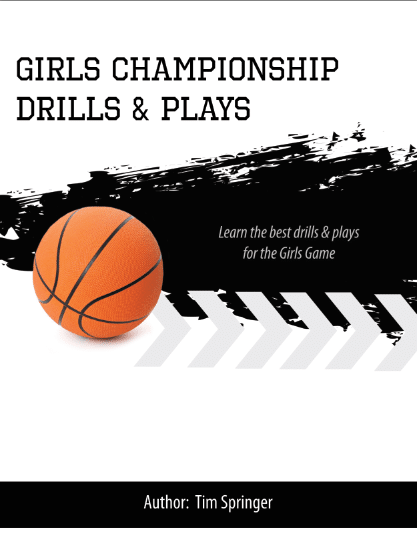 Click on the paypal link to buy the Championship Girls Basketball Drills & Plays for $15.

9 out of 10 teams are under producing offensively because of one of two reasons.

They either have all of the right plays to get players open shots but don’t have players talented enough to hit them.

Or they have very talented players but not the right plays to get them the shots that will make the players successful.

Both of these problems are very prevalent within the girls game.

This usually happens because most coaches are either really good at the x’s and o’s of the game or at player development. It is a rarity to see a coach who is masterful at both.

Which is why this book is such a great resource for any coach that wants to evolve their offensive system into a high powered scoring machine.

They plays in this book have developed numerous girls teams that have made consistent deep playoff runs.
Including some that have led their district in scoring for consecutive years.

The drills in this book, have developed players that have earned back to back to back All State honors. With some even earning athletic scholarships at the D1 and D2 collegiate levels.

In this playbook, you will find plays to get players of all positions open with actions simple enough to run at even the middle school level. Even though they are effective enough to run at some of the highest levels…..including the pros.

They have come from over a decade of tutelage from pro coaches. Including Euro League and WNBA influence.

You will find drills that will cut down turnovers (huge problem within the girls game) , develop aggressive scorers, and make any player on the court a threat with the ball…..including your bench.

The skill work will easily coincide with the plays found in here as well. So that you can develop high scoring players through your system and not separate from it.

If you are coach that really wants to win and is needing your offense to evolve for you to compete at your level of competition…..than this is your playbook.

Download it, implement it, and watch your team go to heights never reached before.