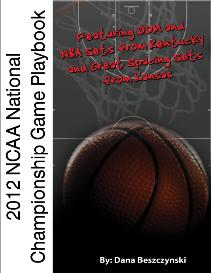 Every coach dreams of the day they will lead their players to a championship of some kind. You plan your basketball playbook for the best ways to win so that you will be the most dominant force in your league. It’s what keeps both players and coaches going, that quest for glory and accomplishment. An innovative and basketball playbook is what you keep striving for and what you know can take you to that glory. You will certainly find something to help you in this quest from a team that achieved the highest goal possible, a national title. Learn from the masters of the game with the “2012 NCAA National Championship Game Playbook”.

Of course, the two best teams prevail to the title game and there can only be one winner. Each team rode their hard play, spirit, and a winning basketball playbook to get to this point. Each coach will have been confident going into the game, as after all, they beat every team before in the tournament, didn’t they? In the end, only one team can triumph on the floor and only one coach can have just that little bit more pride in his basketball playbook and triumphant system. Of course this team was Kentucky, winning in a tough battle over rivals Kansas.

No doubt, integral to John Calipari’s national title winning basketball playbook is the utilization of the dribble drive motion offense. His players run this offense to perfection and he always has influential guards to run it. Analyzing exactly how they do this and reach success with it year after year can give a lot of insight to any coach trying to get this team to a high level. Of course, any basketball playbook could do with some NBA sets that show they can be used by teams like Kentucky, at a lower level. These sets can be used by any team at lower levels, as long as you have access to detailed analysis such as what you can find inside this collection.

The basketball playbook of a champion and a runner-up will have something for every team to succeed. Do you want to learn from mediocre teams, or the best? Of course you know the answer. And if you’ve been dying to know the strategies the best teams use to compete at a championship level, now you can have it at your fingertips. To push your team, make sure you add sets and plays to your basketball playbook that have been proven to be used successfully by champions.

Be the first to review “Basketball playbook of champions: The 2012 National Championship Playbook” Cancel reply