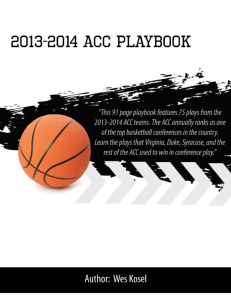 Buy this ACC Conference Playbook for $17.95

This 91 page playbook features 75 plays from the 2013-2014 ACC teams. The ACC annually ranks as one of the top basketball conferences in the country. Learn the plays that Virginia, Duke, Syracuse, and the rest of the ACC used to win in conference play.

The 2013-2014 ACC Playbook highlights 5 plays from each team including 68 set plays, 6 baseline out-of-bounds plays, and 1 zone quick hitter. The conference has outstanding coaching talent including Mike Krzyzewski, Jim Boeheim, Roy Williams, and Tony Bennett. Learn how Coach K used the 1-4 High to get his guards open shots, how Roy Williams used the Box Set to score in the post, and how Jim Boeheim used the Horns Formation to beat his opponents.

What you will get:
• Boston College Eagles – Coach Steve Donahue

Get the 2013-2014 ACC Conference Playbook now and take your offense to a whole new level!