2010 Euroleague Playbook: “Learn the style of play from Ettore Messina, Zeljko Goradovic, and many others” 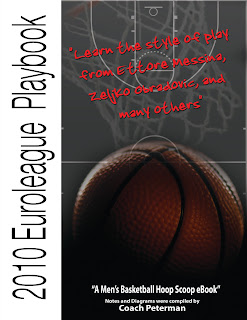 I am proud to introduce you to the 2010 Euroleague Playbook: “Learn the style of play from Ettore Messina, Zeljko Goradovic, and many others” It has 75 plays and 122 pages that is packed with euroleague information. It is a look inside several teams and a chance to spice up your playbook. I have thought that my greatest work was the “International Strategies Playbook”, but this one tops it. The Euroleague teams run different types of sets for posting up guards, posting up post players, motion and pick and roll, zone offense, slobs and blobs.

Regal FC Barcelona is the 2010 Euroleague champion! Barca downed Olympiacos 86-68 in the final before a packed house at the Palais Omnisports de Paris-Bercy in the French capital to win its second Euroleague crown. Juan Carlos Navarro, the only remaining player from Barcelona’s 2003 Euroleague-winning squad, was named Final Four MVP after leading the charge with 21 points.

I have plays from the 2010 Euroleague Champions (Regal FC Barcelona), Real Madrid, BC Khimi, Panathinkaikos, Olympiacos, Aris, and Panellinios.

Here is the breakdown:

I clearly think that this is one of my best playbooks that I have produced. If you want some new wrinkles to put into your set plays then you take a look at this playbook. I know that you will enjoy.

Be the first to review “2010 Euroleague Playbook: “Learn the style of play from Ettore Messina, Zeljko Goradovic, and many others”” Cancel reply