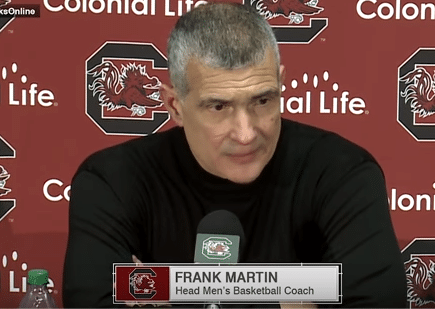 Of all the pressure defense phrases I yelled this season, I yelled the title of this article the most. Defensively we have always been a pressure-oriented team but lacked a complete focus or purpose in our pressure defense philosophy. We were hesitant to get out of gaps defensively to apply more pressure one pass away. Our desire to prevent dribble penetration often led to late rotations and eventual straight line drives or open shots off kick outs, anyway. If we were going to be a good basketball team we needed to find a way to make opponents less comfortable offensively. We needed to create more turnovers and use our quickness to create more scoring opportunities. The 2017 NCAA tournament run by South Carolina, provided the opportunity to marvel and learn the half court man to man pressure defense philosophy of coach Frank Martin. We applied those philosophies this past season and had fantastic results.

Coach Martin is a regular on the clinic scene. Before last season I had listened to coach Martin speak a hand full of times. He is very informative and entertaining, but I never bought into his defensive philosophy mainly because I didn’t feel athletically we could defend that way (high school girls basketball). I can remember thinking, “yeah your guys can play that far up the line because they are 6’8” tall with 7’6” wing spans.” But, after listening to him last year and seeing his team play pressure defense during their NCAA tournament run, I began to reconsider. The athleticism argument didn’t hold water because we weren’t playing against male college athletes, but athletes who were similar to our players. 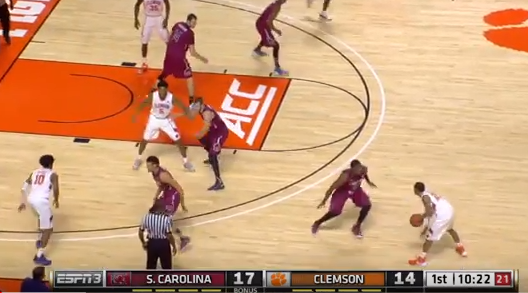 One of coach Martin’s main ideas is forcing the opponent to make long passes. This applies very well to high school girls basketball because of strength limitations. We saw immediate results by playing “on the line, up the line” one pass away from the ball. We placed our defenders on the line directly between the ball and their offensive assignment. We also pushed our defenders up the line toward the ball, everywhere (even help side). The further the ball was from the basket and our defensive assignment the more “up the line” we played. This one defensive adjustment transformed our half-court man pressure defense from solid to suffocating.

Another tenant of Martin’s defensive philosophy is constant and consistent ball pressure. You cannot play “up the line, on the line” with mild to moderate ball pressure defense. Typically when we break down defensively, it starts with inadequate ball pressure. Unlike Martin, we typically run full court man to man pressure with run and jump rotations. Martin prefers not to get into rotations off double teams, which is understandable considering the level of basketball South Carolina plays against. For us though, running and jumping provide more turnover opportunities. It is difficult to get into your run and jump with mild to moderate ball pressure. To run and jump we need the offense pounding the basketball. Without adequate ball pressure, we give the offense no reason to pound the basketball. Like Martin, we emphasize crawling into the offensive player with the ball. We want the opponents offensive players catching the ball facing our basket.

The most positive benefit we have observed with applying Martin’s pressure defense philosophy is in scouting and game preparation. We used to spend a lot of practice time reviewing our opponent’s offensive sets. Although we still utilize some practice time (just in case), as a staff, we can typically predict what will happen in our games. Our opponent will try to run their continuity offense or set plays; we will deny their entries and force their point guard to make plays they are not conditioned or comfortable making. Eventually, our opponent will scrap their offense for some motion or ball screening actions. This same theme has played out over and over again this season.

Coach Martin has been around now a few years, and his coaching tree is growing. Many of the coaches who coached under Martin are also applying his defensive philosophies. Recently I watched my Ohio State Buckeyes (Chris Holtmann has done a fantastic job!) defeat the University of Illinois. Brad Underwood, the head coach of Illinois, was an assistant under Martin at Kansas State. Although Ohio State prevailed in the game the first fifteen minutes were dominated by the Illini defense. Ohio State could not get into any of their sets. I recall yelling for the Ohio State guards to penetrate and just make plays. Eventually, Ohio State adjusted and attacked the pressure defense. In the end, Ohio State just had a better player, yet what I saw was similar to how applying the “up the line, on the line” principle has helped our half court man to man defense.

You can guarantee moving forward I will be consistently communicating, “up the line, on the line” to alert our defense on the importance of being cognitive of our defensive principles. Since incorporating Martin’s defensive principles, we have given up eight points per game less than last season. Our opponent’s field goal percentage has gone down 6%, while decreasing the number of opponent three-point attempts and makes, reducing our opponent’s free throw attempts, and creating just under 100 more turnovers in two fewer games. We are eager to see how year two and beyond look defensively as we gain more experience using and teaching the principles of “up the line, on the line!” 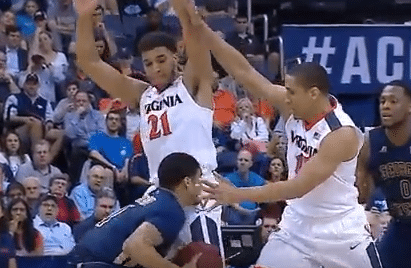 I am a believer that Transition Defense Principles are the most critical thing in a basketball game. If you lose the...