Preparing Your Team for Last Second Situations by Wes Kosel

Trying to predict how the end of a game will play out can be impossible. The challenge for coaches, however, is to prepare his/her team for anything that can happen in a basketball game. Many coaches tend to neglect the end of the game by not practicing situations that are likely to happen in a basketball game and over the full course of a season. Having your team prepared for late game situations can put your team at an advantage when the pressure hits in a real game.

Types of Situations to Practice

In an article I put together on Hoops Chalk Talk, I presented several late game situations to think about and plays that fit into these situations. To read the full article, click here: 11 Late Game Situations by Wes Kosel

Situations to Think About:

Thinking in the Full Court

In addition to time and score, you’ve got to be prepared for whether the play is in the full court or half court. Even further, you have to be prepared for full court pressure, a zone press, or traps. One of the best full court last second plays we’ve seen is the Homer Drew full court play that set up Bryce Drew with a 3-point shot on the wing. I wrote about this play on Fast Model’s blog. To read the full article, click here: 1998 Valpo Bryce Drew Game. 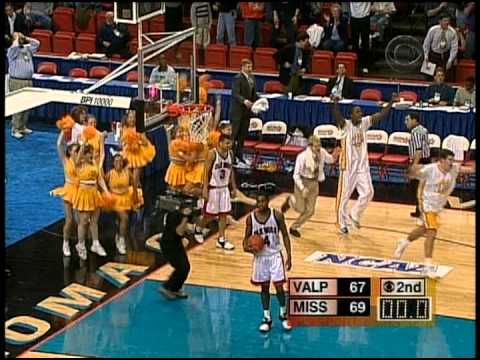 In the spirit of March Madness, let’s take a trip back in time to 1998 when Bryce Drew hit the game winning shot over Ole Miss. The play starts with 2.5 seconds left on the clock and Valpo down by 2 points. Homer Drew draws up a brilliant last-second play throwing the ball the length of the court to his 4 man. While in the air, Bill Jenkins made the pass to Bryce Drew on the wing. Bryce Drew hit the shot sending Valpo on their Cinderella run to the Sweet 16. The Crusaders were a #13 seed defeating #4 seed Ole Miss. Valpo will open the tournament against Maryland today. Bryce is now the head coach of the Crusaders. Just for kicks, I threw in a counter option with the inbounder running the baseline. 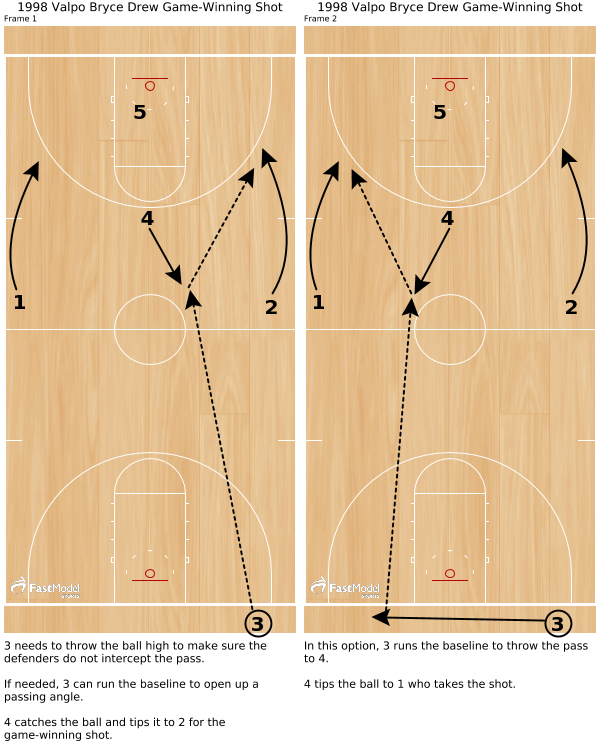 Here are 4 full court last second plays from Tom Crean, head coach of the Indiana Hoosiers. Crean does something interesting bringing a horns set into the full court. In these full-court plays, Crean does a great job of creating multiple scoring options. Be sure to practice these plays and make sure that your inbounder is comfortable making a full-court pass. A baseball-style pass will probably work best. Also, practice making the pass at a lower trajectory if you know you will be playing in a gym with a low ceiling.

Tom Crean Indiana Hoosiers Last Second Plays – Horns Post Cross
4 steps across to screen for 5. 5 cuts to the wing as 2 rubs off of 4 to the opposite wing. 3 looks to hit 5 or 2 for a shot.

Tom Crean Indiana Hoosiers Last Second Plays – Last Second Lob
Similar to the last play, 5 and 2 cut to the wings but 4 cuts to the basket instead of popping out as an outlet. 3 looks to hit 4 at the basket with the lob pass. Put your best athlete at the 4 spot to go up and get the ball for this play. If more time is on the clock, 3 can pass to 5 who looks to shoot or hit 4 on the lob.

Tom Crean Indiana Hoosiers Last Second Plays – Line Cross
5 screens for 1 who cuts across the floor to the right wing. 2 cuts over the top of the screening action to the left wing. 3 looks to pass to 1 for a shot or can run the baseline to pass to 2 on the left wing.

Winning From the Sideline

Several times a year, you may find yourself throwing the ball in from the sideline at the end of a game. Have several plays ready to go and if little time is available make sure to have plays that run through actions before the ball is put into play. In the “Late Game Situations Playbook” by Alan Lambert, there are several options for isolating your best players at the end of the game. The last two plays are sideline out-of-bounds options for the end of the game. Pay special attention to the Brose Baskets Bamberg play as it is great for end of game situations with little time on the clock.

One of the most memorable shots I have from growing up watching basketball is Sean Elliott’s miracle 3-pointer as he tip-toed on the sideline in the 1999 Western Conference Finals. It was Memorial Day, May 31st, 1999 and game 2 of the Western Conference Finals in San Antonio for the Spurs vs. Trailblazers. The Spurs were down by 2 points with 12 seconds left in the 4th quarter. The Spurs have the ball at midcourt. Keep in mind that there is plenty of time left on the clock for the Spurs to run a play to get a shot, and they only need 2 points to tie the game. Sean Elliott takes an incredibly difficult yet spectacular shot to win the game by just barely dodging the sideline. It took a tremendous amount of courage to shoot that shot with that much time left on the clock and a defender in his face (Robinson’s man helped over), but Elliott drained the shot without thinking twice. Elliott went 6/7 from 3 that night. The Spurs went on to beat the Trailblazers 4 games to 0, and then beat the New York Knicks 4 games to 1 in the NBA Finals. The play became known as Sean Elliott’s Memorial Day Miracle, and is a top highlight in his career.

Sometimes it’s All About Being Lucky

To win games at the last second you have to be a little lucky… I’m still a firm believer in the harder you work and the more you prepare, the luckier you will be. There is no one way to prepare for late game situations, but try implementing some drills into your practices that force your team to think like it is the end of the game. Try to simulate the pressure and have your team ready for whatever situations may come during games.