The Pitch Ahead Pass Effectiveness by Mike Cyprien, Jr.

The Effectiveness of the Pitch Ahead Pass in basketball by Mike Cyprien, Jr.   Discover the details on how you can excel your transition offense!

As the game of basketball continues to evolve and the pace continues to pick up, teams at the college level are finding themselves incorporating elements of the NBA game into their systems like the pitch ahead pass. One thing I’ve noticed at the college level, especially the major high level, is the emphasis on spacing and ball movement. Because guards are more athletic and versatile and forwards can step out and handle and shoot the ball, teams who can play guys who can operate in space have had great success.

A major key to having great pace and tempo in a successful offense is the ability to advance the ball up the court before the defense can get set. This is typically referred to as the Pitch Ahead Pass. Coaches have always said that the ball moves faster than players who are running and what better way to get the ball from back court to front court than with a pass up the court to a player in a full sprint. In many off-season and pre-season workouts, advancing the ball with the pass is a big emphasis. Whether it’s a pass over the top to a big man running the rim or a guard running the wing it’s an important staple of teams that want to play fast.

While watching the final two games of the PK80 tournament I noticed that the four teams competing (Michigan St. vs. University of North Carolina and Florida vs. Duke) had great pace, played fast but under control, and did a great job of advancing the ball up the court which lead to easy baskets and put the opposition’s defense on their heels constantly.

In this clip, you’ll see a perfect example of the Pitch Ahead pass in the Michigan St. vs. UNC matchup. Immediately following the defensive rebound, Michigan State’s point guard receives the outlet pass from the forward, and his eyes IMMEDIATELY look up the floor for a teammate who’s in a full sprint. What I, and his coaches also, love what MSU’s point guard did, was that he didn’t waste any time with the dribble. A simple pass up the court and the ball beat four UNC players up the floor, and the lone UNC defender drew a blocking foul because he was late getting to the ball. After the defensive stop, MSU was able to complete a fast break using only ONE dribble, with the player streaking up the sideline. 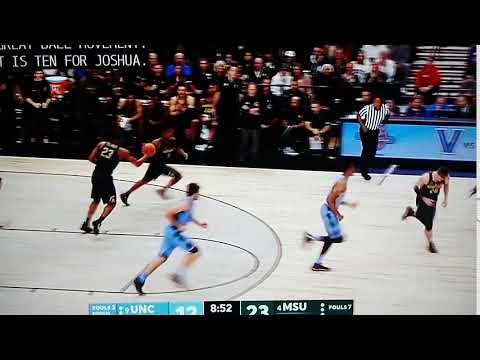 This next clip is from the very next game, which was Duke vs. Florida. You’ll see the Duke point guard receive the outlet from his forward after a defensive stop. While his advancement of the ball isn’t up to the same side of the court, it’s still as effective. Instead, the point guard “crossed” the ball to the open man. When the ball is “crossed” it’s simply changing sides of the court, most times with the pass. This scenario puts the defense in a tough position. The ball is crossed or changing sides forces cross matches or “mismatches” in transition, causes the defense to rotate and scramble to locate their man before they get settled, and gives up penetrate and kick opportunities. This is also another example of advancing the ball with minimal dribbling. As you can see from the clip, the point guard chose to advanced the ball to the opposite side of the court, seeing that the player on that side of the court was further up the court and a terrific shooter. He did so use only two dribbles. While the ball didn’t necessarily beat multiple defenders up the court, as it did in the MSU vs. UNC clip, it forced the defense to shift and forced a bad closeout. In these situations, scramble situations, defenders aren’t set and, as a result, aren’t matched up, so rotations are slow and players are late to close out to shooters. In this fast break a total of three dribbles were used, two by the point guard and one by the shooter. 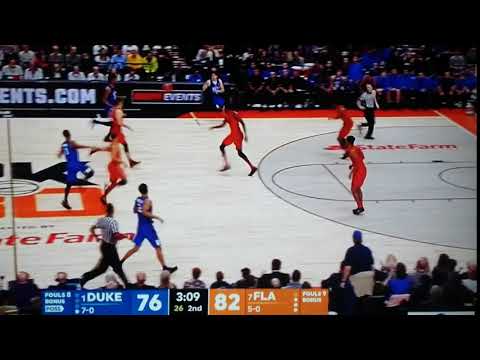 In a perfect world, coaches would prefer to score this way more times than not. It’s a big reason why the better teams score more often and efficiently, and turnover numbers are down. When a team has players who trust one another, their coaches, and their systems, it’s very to share the ball.