With each passing year, it seems like the 3 point shot becomes a bigger and bigger part of the game; spreading the defense out, forcing them to collapse, and then kicking out to the open shooter is at the core of almost every offense you see nowadays – regardless of what level of basketball you are playing.

At the same time, we have also seen a steady increase in the use of the pick and roll. That is because you simply cannot get a high percentage three point shot without first attacking the paint first, and with more and more players becoming adept at both shooting the three pointer and handling the ball on the perimeter, a four-out offense using a high pick and roll can really stretch out the defense, forcing them to either leave the middle of the floor open for penetration, or, sag into the paint and leave a three point shooter wide open.
Today, we’ll look at two plays that will put your pick and roll ballhandler in a position to make a play – whether that play is hit the screener, call his own number, or find the open shooter on the perimeter.

Head On Pick and Roll

The first of those plays is the Head On Pick and Roll. While this play is very versatile, it is especially effective at the end of games, where you will often end up with an open 15 foot jumpshot for the ballhandler.

To begin, the small forward and shooting guard will line up on the wings, deep in the corners, and the center will start in the short corner, over on the left block. The power forward will be on the free throw line, facing halfcourt, where the point guard will be with the ball, waiting for the offense to get in position and begin the play. 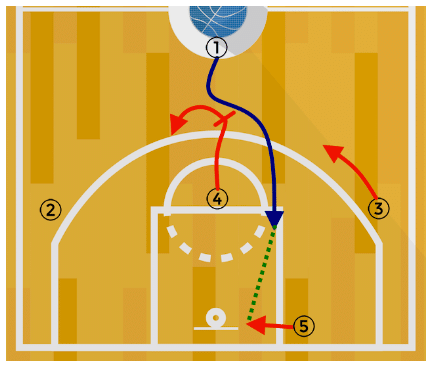 When he is ready, the point guard will begin to dribble forwards, queuing the power forward to come up and set the ball screen a couple feet outside of the three point line. As the point guard approaches, at the last second, the power forward will slide – to his right for this iteration, but he must also be able to adjust and read the defense, should sliding to the left be the more prudent play.

The point guard will give a quick misdirection away from the pick, and then come back to it, taking two hard dribbles off of his teammates shoulder.

The point guard will then make his read – if the 15 foot jumpshot or drive right to the middle of the lane is there, he must take it. The only way the defense will react with intention is if the ballhandler attacks with intention. And when he does, depending on where the help comes from, he must find the unattended player, and hit him with a pass for the open shot.

Step Up Pick and Roll

To start, have your two best three point shooters line up on the left side of the court – one down closer to the corner, and the other up near the foul line extended. For the purposes of this article, we will call them your shooting guard and small forward, but their three point shooting prowess is what should decide where they line up on this play, not their position.

Your center will start out on the left block, and on the right side of the court, the power forward will line up, just inside of where the foul line extended would meet the three point line. 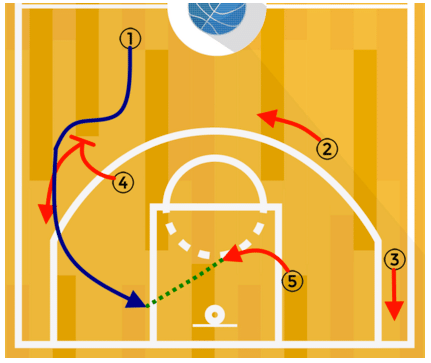 The point guard will start out on the right side as well, way back by the mid court line.

Once the point guard has come off the screen, the rest of the offense must begin to shift. The small forward – positioned lower on the three point arc, will shift all the way down into the corner, making himself available for a kick out along the baseline by the point guard. The shooting guard, starting off on the 45 on the left side of the arc, will slide over to the middle, and the power forward, after setting the pick, will space out over to the arc on the right side of the court.

As the point guard penetrates towards the hoop, the center will curl into the middle of the paint, making himself available for the dump off. The help will usually come, at least initially, from the center’s man, sliding over to stop the point guard’s penetration. From there, teams will likely send the small forward’s man down to help on the center, and the shooting guard’s man to help on the small forward.

If the ballhandler attacks with enough purpose to draw help, and is able to read where the help is coming from early, and he and his teammates the pick and roll and shifts correctly, he will always be able to find a lay-up, or an open man on this play.

If you’d like more help with your half-court offense, make sure you check out our selection of downloadable Basketball Playbooks.

Or if you need help with skill development, check out our Basketball Drillbooks – packed with fun and effective practice ideas your players will love!