Here are two set plays from the Saint Josephs Hawks Offense and Phil Martelli. Martelli just completed his 20th year as a head coach. All 20 seasons have been as head coach of Saint Joseph’s. In those 20 years, Martelli has compiled a 375-265 record, 6 NCAA Tournament apperances, and 6 Atlantic 10 1st place finishes. Saint Joseph’s made it to the Sweet 16 in 1997 and the Elite 8 in 2004. Before taking over as head coach, Martelli was an assistant at Saint Joseph’s from 1985 – 1995. Before that, he was a high school coach at Bishop Kenrick and an assistant at his alma mater, Widener, from 1977-1978. He has been named Atlantic 10 Coach of the Year four times (1997, 2001, 2004, 2005) and has also received the title of AP National Coach of the Year, Naismith Coach of the Year, and Henry Iba Award.

In this horns set play, 1 dribbles to the left wing and gives the ball to 3 on a dribble hand-off. As 3 is receiving the ball from 1, 5 and 4 step over to set a staggered ball-screen for 3. 3 drives from left to right off of the screen and can pass to 5 rolling to the basket, 4 popping to the top of the key, or to 2 spotting up in the right corner. 3 should also look to drive to the basket if he can turn the corner on the screen.

1 passes to 2 then cuts into the lane and back to the left wing off of a screen from 5. While this is happening, 4 moves in towards the free-throw area. 2 then dribbles towards the middle of the floor off of a staggered ball-screen from 5 and 4. 2 looks to pass to 5 rolling to the basket if open. In the second option of this play, 1 loops around both 5 and 4 to get an open shot at the free-throw area. 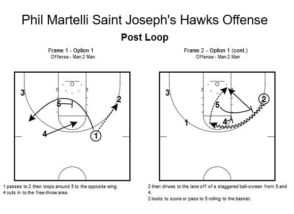