The 2016 Olympics in Brazil are coming soon, but before heading to Rio there are still three Olympic Qualifying Tournament Previews to be played to determined which remaining teams will be competing in the Olympics. There are nine teams that have already qualified for the Olympic Games:

The remaining three spots will be determined by three Olympic Qualifying Tournaments held in Serbia, Italy, and the Philippines. In the Serbia Tournament, Angola, Czech Republic, Japan, Latvia, Puerto Rico, and Serbia will compete for one spot to make it to Brazil.

Coach Dordevic is a former Serbian professional player and current coach of the Serbian National basketball team. During his playing career, he played for several clubs including FC Barcelona, Real Madrid, and a short stint with the Portland Trail Blazers. He is best known for a buzzer-beating shot in the 1992 Euroleague final when he was playing for Partizan. He also played for the Serbian National team and played in several EuroBasket competitions. In 2013, he was named the head coach of Serbia and guided the team to a silver medal at the 2014 FIBA World Cup. In 2015, Serbia competed in the EuroBasket tournament and played in Group B with Spain, Italy, Turkey, Germany, and Iceland. In the five group games, Serbia went 5-0 scoring 10 points in group play and advanced to the Knockout Stage with Spain, Italy, and Turkey (all of which had a 3-2 record). Serbia opened the tournament on September 5th, 2015 with a 80-70 victory over Spain.

In the knockout stage, Serbia drew Finland in the first round and handled them pretty easily winning 94-81. The next round was the same with Serbia winning easily over Czech Republic. In the semifinals, Serbia lost to Lithuania in a close battle and then lost to France in the third place game. Serbia finished with a 7-2 record in the tournament and moved up to #6 in the FIBA World Ranking behind #1 USA, #2 Spain, #3 Lithuania, #4 Argentina, and #5 France. Serbia’s last Olympic appearance was in 2004 in Athens as they did not qualify in 2008 or 2012. Serbia’s only medal in the Olympics was during the 1996 Olympic Games in Atlanta when they finished second earning a silver medal.

As of now, the top players are Boban Marjanovic, Nemanja Bjelica, Nikola Kalinic, Bogdan Bogdanovic, Milos Teodosic, and Miroslav Raduljica. Marjanovic played for the San Antonio and Austin Spurs in 2015-2016, and was a player for two seasons at Crvena Zvezda before that. He was a 3x Serbian Super League MVP (2013-2015), Serbian League Champion (2015), and All-Euroleague First Team (2015). Bjelica has played for the Minnesota Timberwolves since 2015 and was drafted by the Washington Wizards in 2010 (second round). Kalinic currently playes for Fenerbahce in the Turkish Basketball Super League. He was a Turkish Cup winner in 2015 and a Serbian Cup winner in 2015. Bogdanovic also plays for Fenerbahce in the Turkish Basketball Super League and was named the Serbian League Finals MVP in 2014 when he played for Partizan. He is a two-time Serbian Cup winner, two-time Adriatic League Champion, and two-time Euroleague Rising Star. Lastly, Teodosic is the point guard and plays in the VTB United League for CSKA Moscow. He has played for them since 2011 and before that played for Olympiacos. He was named Euroleague MVP in 2010 and was a Euroleague champion in 2016. Raduljica, a 7-foot center, played well in EuroBasket and consequently played some with the Minnesota Timberwolves in 2015. He then went on to Panathinaikos and was a Greek Cup winner in 2016. Below are some highlights from each player.

Below is a video of offense used by Serbia in EuroBasket 2015. After the video, there are play diagrams and pdf downloads as well.

In this play, Serbia gets a quick shot look on the left wing from a secondary pin down screen, but when it isn’t there 2 uses a staggered ball-screen at the top of the key from 3 and 5. 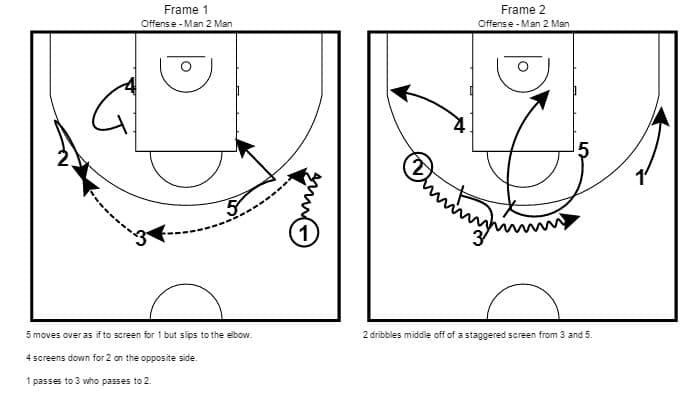 This play is similar to the first one and Serbia likes to use it as a secondary option with 5 moving into a drag screen and the other three players on the left side of the floor. In this option, 1 quickly passes to 2 who looks for 3 on the left wing. If x3 helps middle, 3 may be open for a shot on the wing. 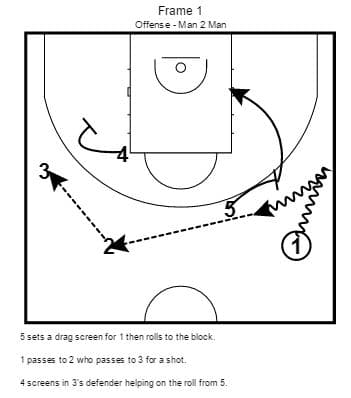 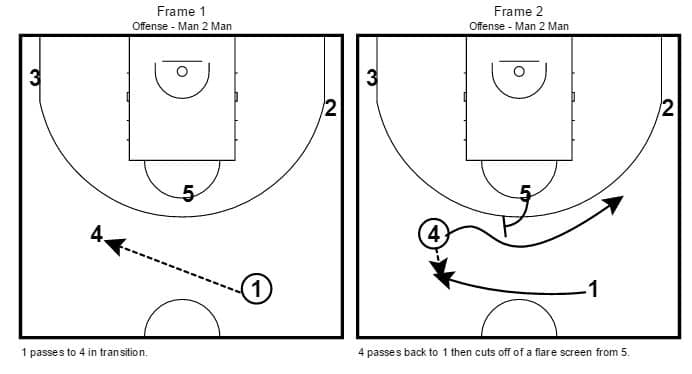 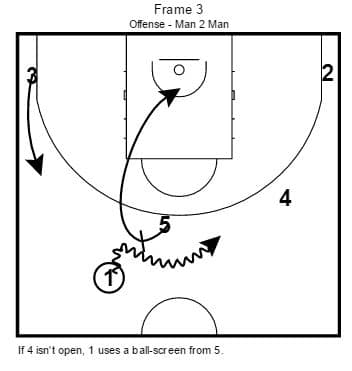 Serbia gets a quick shot in the corner using this inbounds play. 4 screens in for 5 and 2 sets a screen for 3 who cuts to the top of the key for a shot. 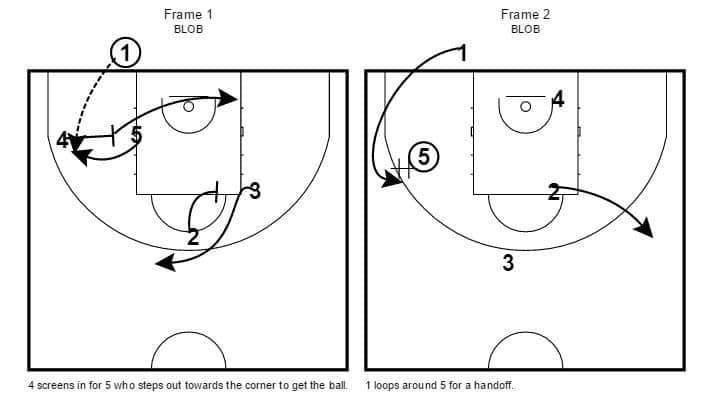 1 dribbles up the right sideline pushing 2 into a zipper screen. 1 passes to 5 with perfect timing so that 2 can take a handoff as he cuts off of the zipper screen and around 5. 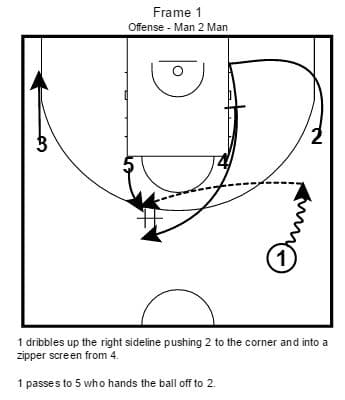 In this inbounds play, 2 makes a zipper cut off of 5 to get the ball from 1. 4 moves up to set a ball-screen for 2 just as he catches it. As 2 dribbles left, 4 rolls to the basket and 5 replaces 4 at the top of the key. 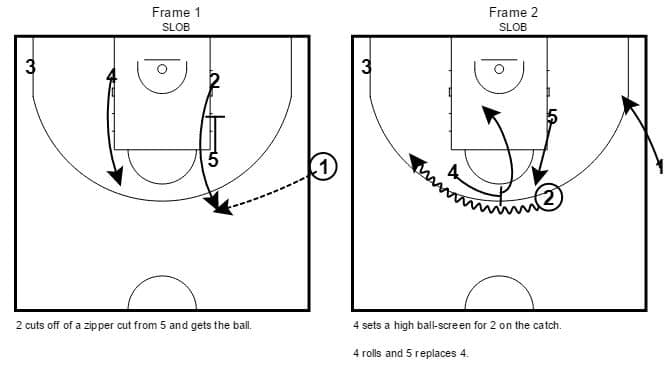 Serbia likes to run the point guard up the sidelines and to get a quick post they used this spacing pattern with the point guard and center on one side of the floor and 4, 3, and 2 all on the right side of the floor (and spaced on the 3-point line). The spacing makes it hard for the defenders to help in the post and if all of your players are capable 3-point shooters this can be an easy way to get a 1 on 1 look in the post. 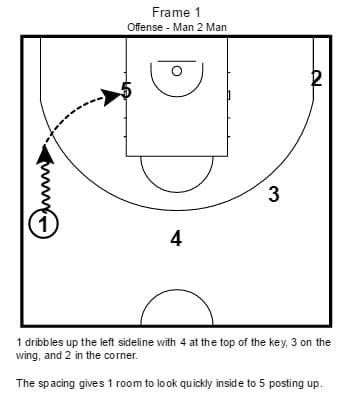