Coach Bagatskis is a former Latvian professional player and current head coach of the Latvian National Basketball team. As a player, he played for several clubs from 1985 to 2006, ending his playing career with Barons Riga. He would then go on to coach with the same club and then several others (Kryvbasbasket, Budivelnyk Kiev, and most recently Nizhny Novgorod). As a player, he was a LKL 3-point shootout champion in 2004, a two-time Lithuanian League Champion, and a Baltic Basketball Champion. As a coach, He won a Lithuanian League Championship, a Baltic Basketball League Championship, and was a two-time Ukrainian Basketball SuperLeague Champion (2013 and 2014). He was appointed the head coach of the Latvia National Team in 2010 and has led the team ever since. In 2011, Coach Bagatskis led Latvia to a 21st place finish in EuroBasket and improved that to an 11th place finish in 2013. They improved that even more with an eighth place finish in 2015. This is the first time that Latvia has qualified for the FIBA World Olympic Qualifying Tournaments.

In EuroBasket 2015, Latvia played in Group D with Lithuania, Czech Republic, Belgium, Estonia, and Ukraine. In Group play, Latvia finished 3-2 advancing to the knockout stage. In the knockout stage, Latvia beat Slovenia in the first round but fell to France in the second round. In the 5-8th place semifinals, Latvia lost to Greece and played in the seventh place game against Czech Republic. They ended with an eighth place finish and a 4-5 record. They also moved up three spots in the FIBA World Rankings from 38 to 35. Latvia and Italy are tied for the 35th spot.

The top player for Latvia is Kristaps Porzingis, however Porzingis will not be playing in the Olympic Qualifying Tournament and has opted to stay in New York and continue working out with the Knicks. Porzingis is the highest drafted Latvian player, and before him the highest drafted player from Latvia was Andris Biedrins. Other notable players include Kaspars Kambala, Ainars Bagatskis (current head coach), and Igors Miglinieks. The current roster includes Kaspars Berzins, Janis Timma, Dairis Bertans, Janis Strelnieks, and Davis Bertrans. Berzins currently plays for Zenit Saint Petersburg in the VTB United League and is a four-time Latvian League Champion. Timma also plays for Zenit Saint Petersburg in the same league and was named the VTB Young Player of the Year in 2015. Dairis Bertans plays for Bilbao Basket in the Liga ACB and is a four-time LBL champion. Strelnieks plays for Brose Baskets in the Basketball Bundesliga. He played for the 2007 Latvian U18 team that won bronze in the U18 European Championship. Davis Bertrans currently plays for Laboral Kutxa, but was drafted in 2011 by the Indiana Pacers in the second round of the NBA Draft. He is a three-time basketball league of Serbia champion. Below are some highlights from each player, including some of Kristaps Porzingis just for kicks.

Below is a video of plays used by Latvia in EuroBasket 2015. Below the video are play diagrams and a pdf playbook download as well.

In this horns set, they curl the 4 around the 5 then send 5 to set a down screen for 4. This can lead to hi/lo opportunities as well. 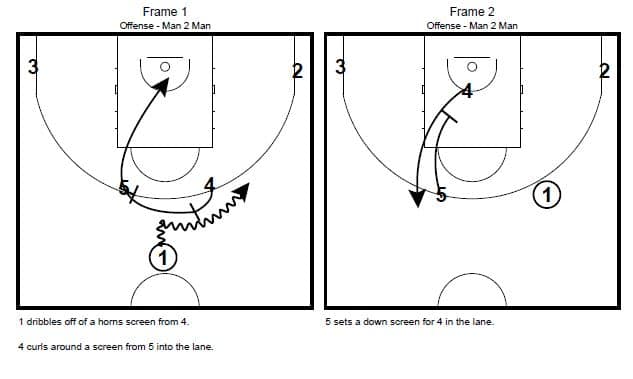 Latvia likes to run cutters off of an Iverson/Flare cut type action from one wing to the other. In this set, they run 2 from the top of the key out to the wing and screen across for 5. 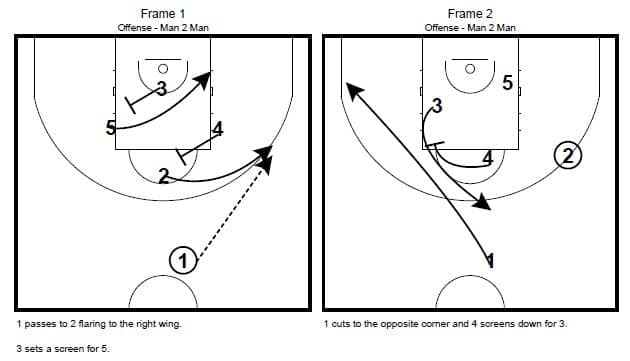 This play was used as a secondary break and has 5 set a slot ball-screen for 1 then roll into the post. The ball is reversed with a second ball-screen set and then 5 flashes high to the elbow. 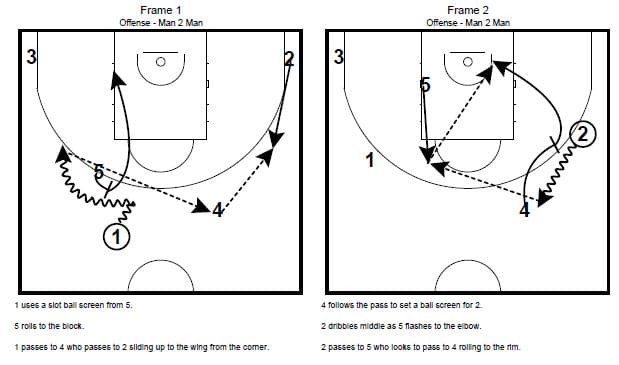 Here is that Iverson/flare cut type action with 2 running across the floor from the left wing to the right. If 2 isn’t open, they run a cross-screen/down-screen action for 3. 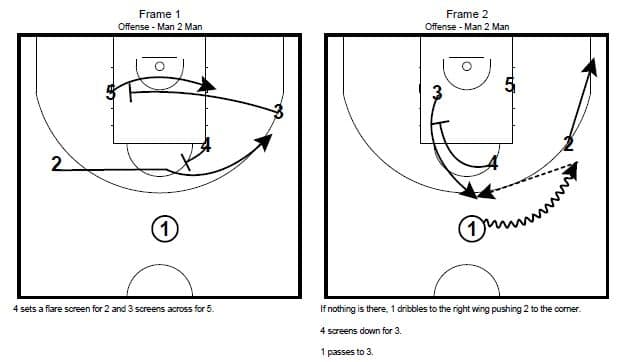 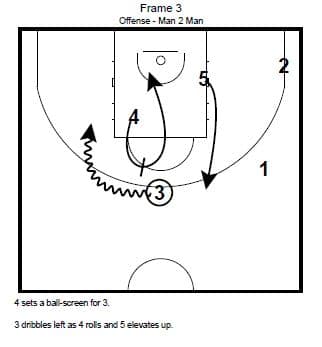 This is an easy way for Latvia to get the ball in and go straight to their continous ball-screen action (see in the pdf link below). They throw the ball in to 5 and give it back to the point guard with a quick handoff.

In this horns set, 2 steps out to get the ball on the right wing and 3 sets a back-screen for 5 on the left block. In the video, you will see the great pass that 2 made to get the ball to 5 at the rim. 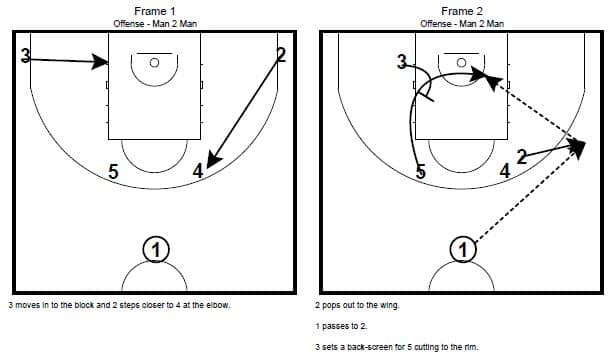 Once again, Latvia runs a guard across the floor to the opposite wing and a flare screen from the post. Once 2 has the ball, they move into a cross-screen/down-screen action. 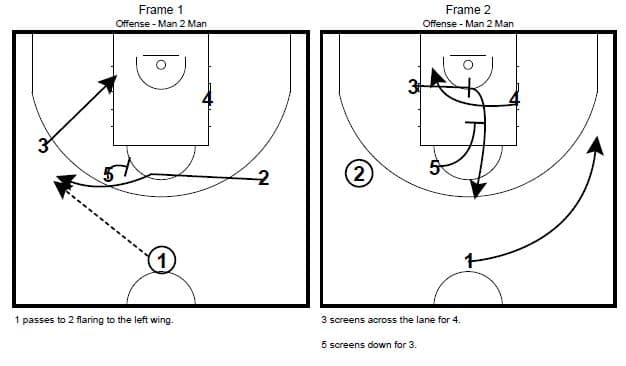 This play starts close to a 1-4 high set but 1 pushes 2 to the corner as he dribbles to the right wing. 4 steps out to get the ball and then swings it to 3. 5 sets a shuffle screen for 1 and then 5 and 4 set a staggered screen for 2 in the corner. 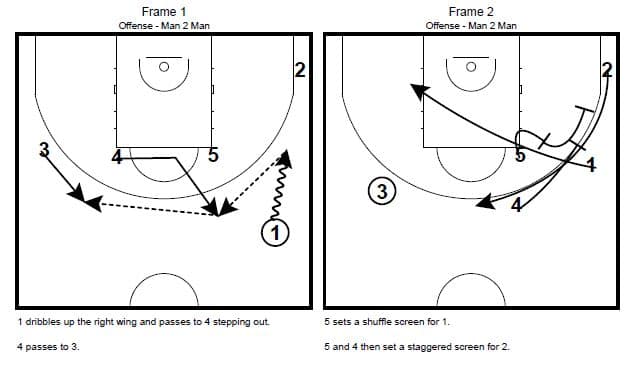