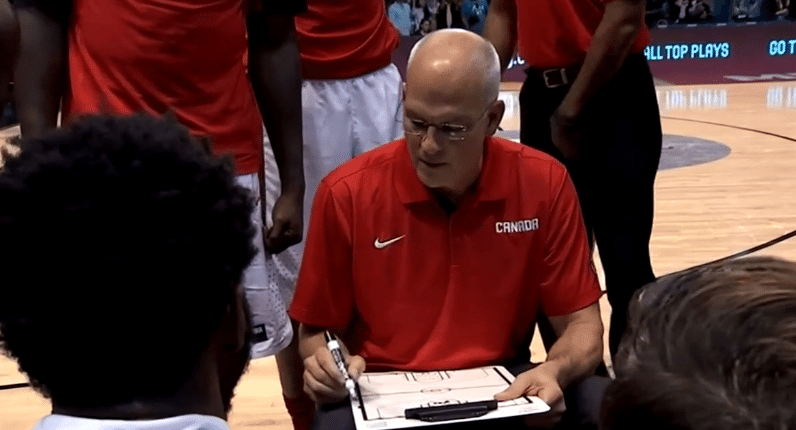 The team is led by Head Coach Jay Triano, who is currently an assistant coach with the Phoenix Suns. He is a retired Canadian professional basketball playerplaying in college at Simon Fraser and was drafted in 1981 in the 8th round of the NBA Draft by the Los Angeles Lakers. He never played in the NBA, but played for the Canadian National Team in the 1984 and 1988 Olympics. He began his coaching career in 1988 for his alma mater, Simon Fraser, and stayed there until 1995. From 1998 to 2004, Triano was the head coach for the Canada men’s national team, during this time he also served as an assistant for the Toronto Raptors. In 2008, Triano was an assistant for the United States men’s national team and was named the head coach of the Toronto Raptors. He was the first Canadian-born head coach in NBA history. In 2012, Triano took over the Canada National Team for the second time and also was named a Portland Trail Blazers assistant. Just this spring, Triano made a move to join the Phoenix Suns as an assistant coach. Below is a video of Coach Triano speaking at a basketball clinic.

The current roster consists of several NBA players, but not all are committed to playing in the Olympic Qualifying Tournament. Here are some of the best players available to Canada: Tristan Thompson, Kelly Olynyk, Andrew Wiggins, Nik Stauskas, Cory Joseph, and Brady Heslip. Thompson is a member of the Eastern Conference Champion Cleveland Cavaliers and is currently playing for an NBA Finals Championship against Golden State. Olynyk has been a member of the Boston Celtics since 2013 and was named to the NBA All-Rookie Second Team in 2014. Wiggins, the 1st pick in the 2014 NBA Draft, just finished his second year in the NBA with the Minnesota Timberwolves. He was named the 2015 NBA Rookie of the Year and was also named to the NBA All-Rookie First Team in 2015. At Kansas, he was the Big 12 Freshman of the Year and was also first-team All-Big 12. Stauskas was drafted by the Sacramento Kings in 2014 and is now playing for the Philadelphia 76ers. Cory Joseph, the team captain,  started his NBA career with the San Antonio Spurs but this past season played on the Toronto Raptors. The Raptors finished second in the Eastern Conference losing to the Cleveland Cavaliers in the Eastern Conference Finals. Heslip currently plays for Pallacanestro Cantu in the Lega Basket Serie A in Italy. He played in the NBA D-League for the Reno Bighorns in 2014-2015. Below are some highlights from each player.

Below is a video showing some plays that Canada used against Mexico in the FIBA Americas 2015 Tournament. Following the video are play diagrams and a pdf playbook download. Canada likes to use a horns stagger series. In the video, you will see how they open up a drive off of a handoff, an open shot, and a back door cut using the same horns series. Canada has good balance with a solid point guard, athletic wings, and bigs that can shoot.

This is a classic cross-screen/down-screen action but Canada adds a second post to the down screen making it a double screen at the free-throw line for the shooter. In the video, they use this play to get a quick post up for Wiggins (2) in the right short corner. 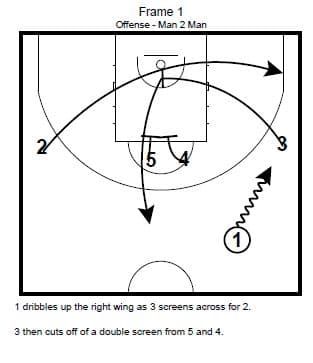 A different take on the horns roll/pop, Canada pops the big closest to the ball and rolls the opposite big. This could be a personnel decision, or it could be used to throw off teams that are used to the closest big to the ball screen rolling to the rim. Canada starts this horns stagger series with a throw to the high post and a staggered screen set for 3 in the corner (with 1 leading the screen). In this option, 4 dribbles towards the action to give 3 the ball with a dribble handoff. 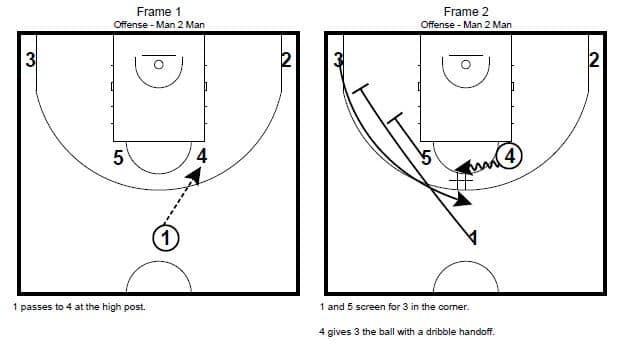 1 passes to 4 a the high post then runs past 5 to set the staggered down screen for 3. Instead of coming around for a handoff, 3 pops to the wing for a shot. 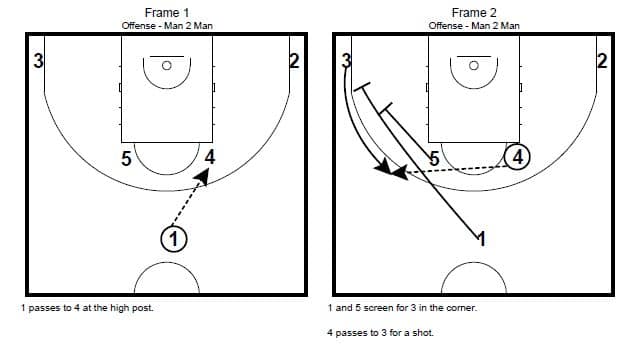 If the defense starts jumping the screen and cutter (3), 1 can look to slip to the rim for an easy layup. In the video, Canada gets a great look but Cory Joseph misses the easy bucket. 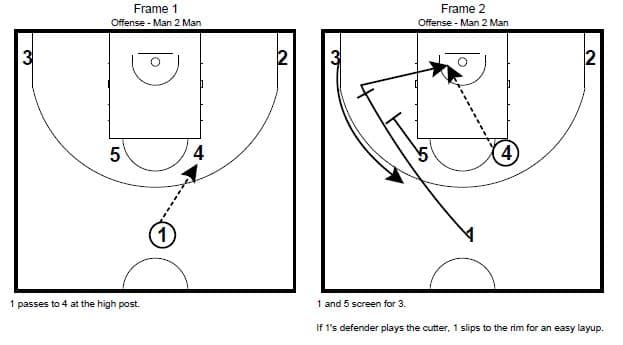 In this play, Canada sends 4 into a ram action to screen for 5 who sprints right into a high ball-screen for 1. 1 drives left as 5 rolls to the basket and 4 replaces 5. 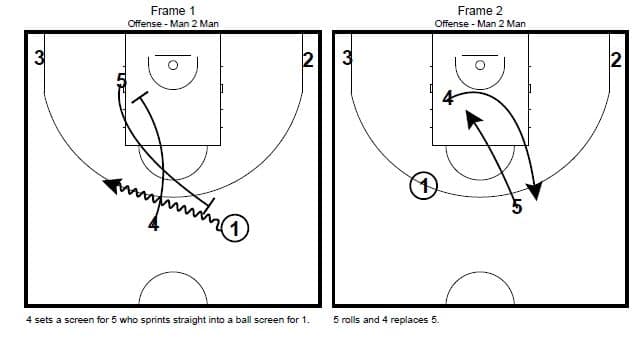