Attached in this playbook are 4 defensive situations to practice as well as 2 shooting drills from Lon Kruger, Steve Henson, and the Oklahoma Sooners. The Sooners went 24-11 this season (12-6 Big 12) and made it to the Sweet 16 of the NCAA Tournament. In Kruger’s 4 seasons at OU, the Sooners have increased the number of wins each season (15, 20, 23, and 24). Before taking over for the sooners, Kruger was the head coach at UNLV from 2004-2011. During his time in Las Vegas, he led UNLV to a Sweet 16 appearance in 2007 and to 4 NCAA appearances. Read Below about the Oklahoma Sooners defense / shooting drills

Frame 3: As 2 cuts to the wing, x2 will deny the wing entry and x1 will load into the lane.

Frame 5: On a baseline or staggered screen, the bigs and guards have to know which switching scheme they are in to switch effectively.

Frame 6: The shooter starts at spot 1 and has to make 2 in a row to start a streak. He then shoots until he misses. Once he misses he gets a second chance at spot 1. The players add up all of the streaks.

Frame 7: This shooting gun drill works on jump hooks inside the lane. The players line up in a position to catch the ball near the basket and ready to shoot a jump hook. 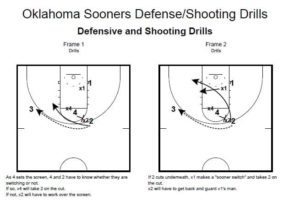 ← Prev: Horns Pick & Roll Sets by Wes Kosel Next: How to run your programs Saturday League →