There are many types of offenses and formations available to basketball coaches including motion, continuity, ball-screen, 1-4 high, blocker-mover, etc. There is no one “perfect offense” for a team or program, but the goal of a coach should be to find the offensive system that works best for his/her team. A lot of times, this includes making adjustments year to year with an offense or adding tweaks to existing plays. A good offensive system gets all of your players involved and promotes the fundamentals of the game (spacing, passing, and screening). The Swing offense is a great offensive system if you are looking to promote these skills with your players. Under Head Coach Andy Partee at Colorado College, we have ran a variety of offenses but our base motion uses swing principles. I am not an expert with how Coach Bo Ryan and other swing offense coaches implement their systems, but I have noticed similar actions and patterns with how we run our offense at Colorado College.

Benefits of the Swing Offense

There are many benefits of running the swing offense including:

Spacing – the basic spacing for the Swing offense is four out and one in. Typically, there is a ball-side triangle (as shown below). It is important to keep in mind that in most swing offenses all players are interchangeable and it doesn’t matter who is in the post or on the perimeter. This can be a huge advantage if you have long wings who are capable of posting up. 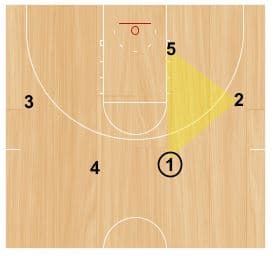 Initial Action – Wing Up-Screen – As the ball is passed from 1 to 4 (shown below), there are several options for continuing the offense. In this option, 5 sets an up-screen for 2 on the right wing. 2 can cut over or under the screen, but will finish the cut at the left block creating a ball-side triangle. 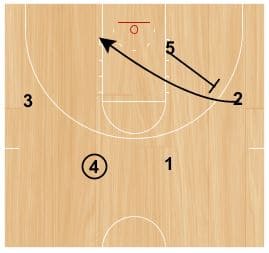 Initial Action – Slot Up-Screen – Another option as the ball is reversed is for 5 to set an up-screen for 1 in the slot. Again, 1 can choose to go either direction on the cut, but will finish at the left block creating a ball-side triangle. 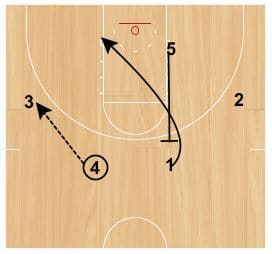 Below is a video showing some of Wisconsin’s offense during the 2015-2016 season. As you can see, they use a variety of screening actions and combinations of actions.

The combinations of up-screen/down-screen and up-screen/flare-screen are staples of swing offense teams. Swing offenses also can have the big (or post player) screen as a part of the ball-side triangle (instead of waiting for it to reverse). In Frame 2, you see 5 set an up-screen for 1 in the slot. This “UCLA” action forces the defense to guard the cutter to protect against layups, and if you have a good shooting big you can often get open shots from 5 stepping out to get the ball on the perimeter. In Frame 4, the ball is reversed and 1 sets a screen for 2 on the wing then cuts around a down screen from 5. This combination can be difficult for teams to effectively defend, especially with post defenders on the perimeter and guard defenders now in the post. 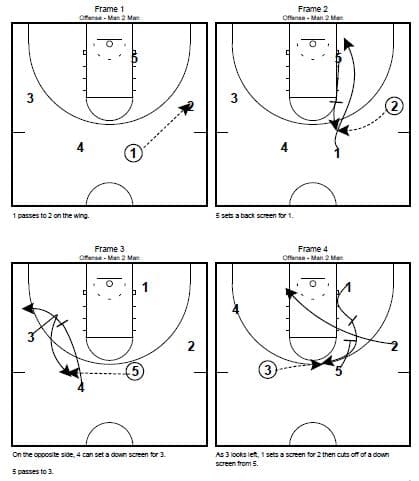 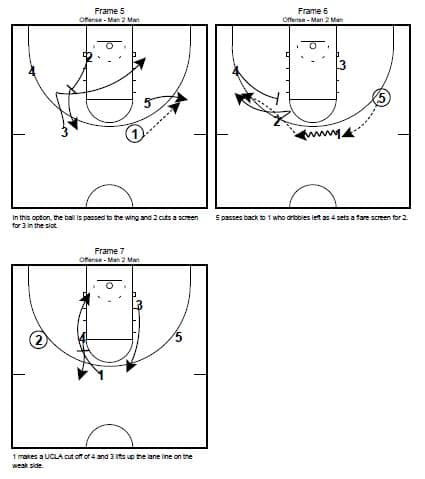 In this play, the Badgers start with a flare-screen as the 4 trails into the half court. Then, 5 sets an up-screen on the wing and 1 sets a down-screen then slips to the rim for an easy layup. 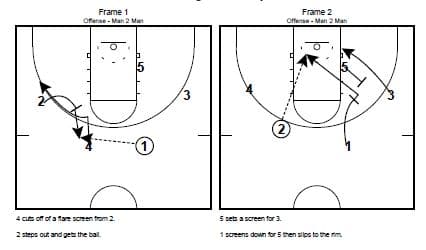 Utah starts in a four out set and swing the ball into a staggered screen away for 3 on the right wing. Out of the staggered screen, Utah moves into a blocker-mover type set with 5 setting a cross screen at the block and 4 setting a flare screen in the slot. 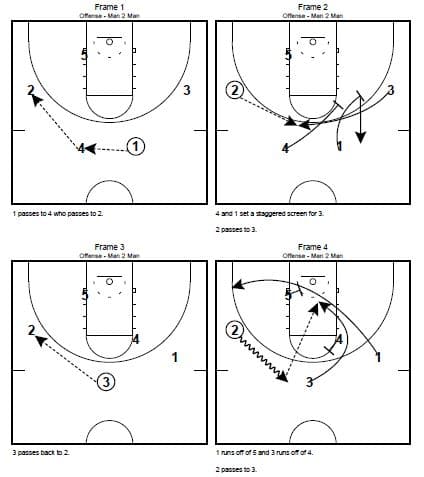 This is a simple secondary action to open up the post. The ball is swung to the right wing and 2 looks to pass to 5 posting up. The staggered screen away occupies the defense allowing for 5 to post up 1 on 1. You can also get good shots off of the staggered screen with 3 cutting to the top of the key for a shot. 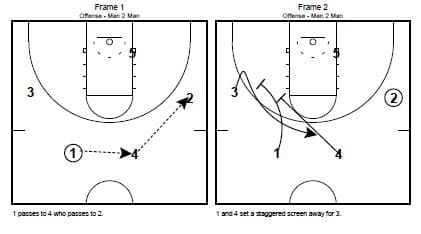 In this set, 5 sets an up-screen as a part of the ball-side triangle then gets the pass from 1. 5 looks for 3 posting up and cuts through the lane on a post cutting pattern. 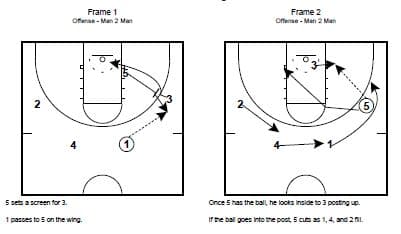 This is a continuity set that we used against man and zone defenses. The offense shifts a little bit to create an overload on the right side of the floor and continues with multiple up-screens to the wing by 4. 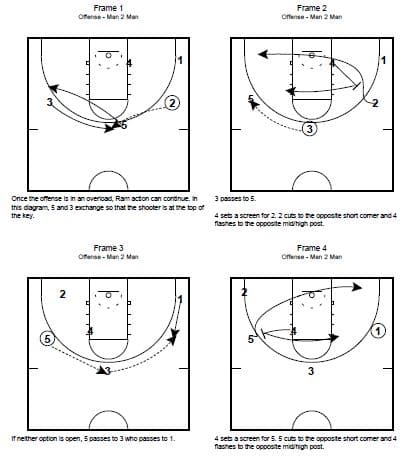 This action starts with an up-screen as a part of the ball-side triangle then 2 curls around a second screen by 5. 1 dribbles over looking to pass to 5 posting up. 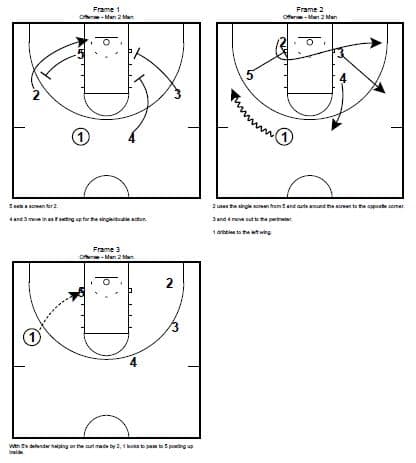 The ball is reversed with 5 following the ball to the left block. 4 and 1 then set a staggered screen away, and once 3 has cleared the screen 1 circles out to the left corner. Once 3 has the ball near the top of the key, he looks to use a ball-screen from 4 at the right elbow to attack the empty right side of the floor. 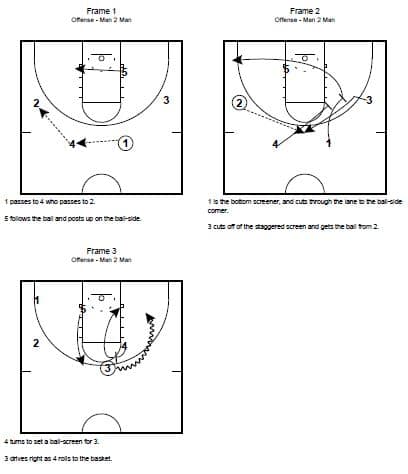 This play is similar to the last, but 5 will go away from the ball as it is reversed to 3 on the right wing. 1 and 4 set a staggered screen for 2 on the left wing, and once 2 has cleared 4 circles out to the right block. If x4 is helping on the staggered cut by 2, it may open up 4 for an easy post up. 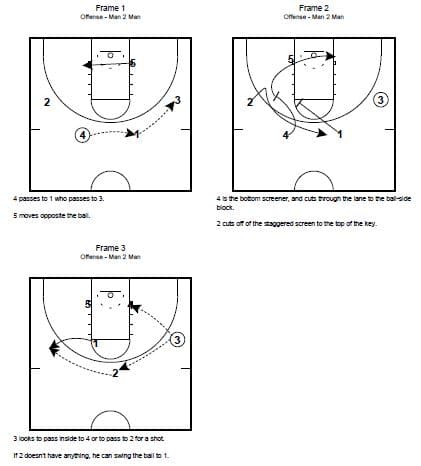