Attached are 3 set plays from the New Zealand National Team. New Zealand is part of FIBA Oceania and has won 3 gold medals in the Oceania Championships (2009, 2001, & 1999). New Zealand’s best finish in the FIBA Basketball World Cup was 4th in 2002. That year, New Zealand beat Russia and Venezuela in group play. They would go on to lose to eventual champion Yugoslavia and lost the 3rd place game to Germany. In 2014, New Zealand went 2-3 in group play and made it to bracket play. New Zealand faced off against Lithuania and lost in a close game 76-71. Lithuania would go on two more rounds and eventually lose to the United States in the semi-finals. These plays were taken from the 2014 FIBA Basketball World Cup.

1 dribbles to the right wing as 4 screens down for 2. 2 cuts off of the screen and gets the ball from 1 on a dribble hand-off. Once 2 has the ball, he dribbles right off of a ball-screen from 5. 4 cuts across the lane. 2 passes back to 5 after clearing the screen. 5 immediately looks inside to 4 for the hi/lo pass. 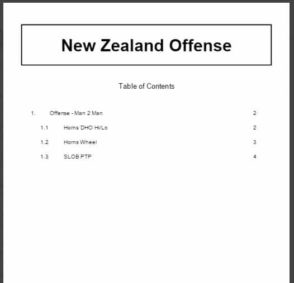