Below are two set plays used by the New Orleans Pelicans to get the ball to Anthony Davis in the post. The Pelicans are led by Head Coach Alvin Gentry, who just finished his first year with the team after coaching with the Golden State Warriors and Los Angeles Clippers as an Associate Head Coach. Gentry got his coaching start as an assistant at the college level, making stops at Baylor, Colorado, and Kansas. While at Kansas, Gentry was a part of the 1988 NCAA Championship team under Larry Brown. In 1989 Gentry jumped into the NBA as an assistant with the Spurs. Since then, he has had various head and assistant positions with the LA Clippers, Miami Heat, Detroit Pistons, Phoenix Suns, and Golden State Warriors. Gentry played at Appalachian State under Press Maravich and Bobby Cremins.

The video shows two plays that have Anthony Davis roll into the post for a post entry pass.

Davis sets a ball screen in transition then rolls directly into the post. Instead of moving the ball out of the ball screen, the point guard looks to pass to Davis posting up. If the point guard has to dribble back towards the action to make the pass he can. 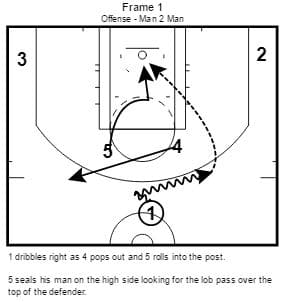 Click on the pdf link below to download the Alvin Gentry New Orleans Pelicans Offense for Anthony Davis Playbook: