The bracket has been released and the teams have been seeded. Kansas, North Carolina, Virginia, and Oregon have all received #1 seeds. There has been quite a bit of talk about Michigan State deserving the #1 line over Oregon or Virginia, but as Izzo has been saying he is going to have to get through a tough team either way. This tournament feels wide open, but at the same time it feels like the same powerhouses are in control: Kansas, Michigan State, North Carolina, Kentucky, Duke, Villanova, etc. As I was looking through the bracket, it was hard to see a high seed making much of a run. However, the #1 through #4 seeds in each region are incredibly strong. In the South, for example, Kansas is pooled with #2 Villanova, #3 Miami, and #4 California. Not to mention the #5 is Maryland the #7 is Iowa (both were ranked in the Top 5 at some point this season). The West is open to the top 4 seeds as well, with Oregon, Oklahoma, Texas A&M, and Duke all having a shot at the Final Four.

With the first round approaching, let’s take a closer look at the four teams that earned the distinction of a #1 seed and are favorites to make it to Houston. 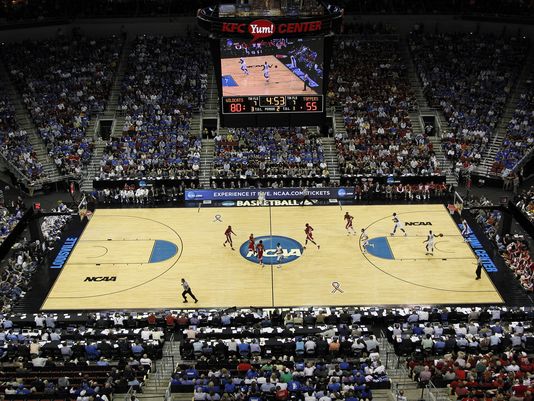 Kansas is the best all-around team in the field. The Jayhawks score, defend, pass, and play well. However, several NCAA Tournament letdowns will be in the back of Bill Self’s mind. With no true star, can the Jayhawks make it all the way?

In taking a look at what the Jayhawks like to do, it definitely centers around making teams defend ball-screens. Frank Mason is playing the point guard position perfectly for Coach Self, and always seems to make the right play. Perry Ellis is often the man setting the ball-screen, and is dangerous as a roll or pop man. As always, Kansas is good at getting the ball inside to the post, and with more post touches come more open three point shots.

Here is another set play from Bill Self, featured on HoopsChalkTalk as the Play of the Day back in February.

Kansas Jayhawks Play of the Day – Post Flash Back Cut

The Tarheels come into the NCAA Tournament having won 5 games in a row and 7 out of the last 8. After winning with a large margin over Notre Dame in the ACC Tournament semifinal, UNC made the right plays to beat Virginia by 4 points in the tournament championship game. Although Roy’s boys have shown stretches this year of not shooting well, they are playing better now and seems to be on a roll. Plus, all of the talent on the North Carolina roster always give them a shot.

The Cavaliers are 26-7 with a 13-5 record in the ACC. Tony Bennett and UVA are undefeated at home this season and only lost 1 neutral game (to UNC in the ACC Tournament). Coach Bennett is known for his defense (holding opponents to 59.6 points per game on 41.9% shooting), but they are a good offensive team as well. The Cavaliers are shooting well from 3 (40.9%), pass the ball well, and take care of the ball with a plus 2.8 turnover margin. Teams tend to not shoot as well in these big tournament games on neutral courts, so the numbers may play in to Virginia’s favor.

The basic offense for Coach Bennett is his wheel/cavalier motion with flare-screen and cross-screens happening simultaneously. This has often been referred to as a blocker/mover offense, but I prefer wheel as the guards continue in a circle around the two post players. In the video, you will also see how Virginia can “reverse” the wheel to get the screens they want.

The longtime mid-major coach at Creighton is now with a #1 seed powerhouse. It feels like most people aren’t too familar with Oregon and the players, but they are a different team this year than they have been in the past. In the past, it seemed like Coach Altman always had small, quick guards who made the plays (just look at last season). This season is different, the Ducks are long, strong, and big. This may make the difference and allow Oregon to make a deep run in the tournament.

As far as X’s & O’s, Oregon likes to score. Coach Altman’s big wings and guards like to take opponents off the dribble, and with all 5 players able to shoot from the perimeter it forces defenses to choose whether to guard the penetration or the shot. Oregon also has played against some zone defenses in the Pac-12, and this may be an important detail as Baylor or Duke will probably zone the Ducks if they end up playing each other.

In addition, here is a zone iso play Oregon used against Utah.

All four of these teams have a distinct style that has gotten them this far, and it will be interesting to see which teams can maintain their identity throughout the tough NCAA bracket.